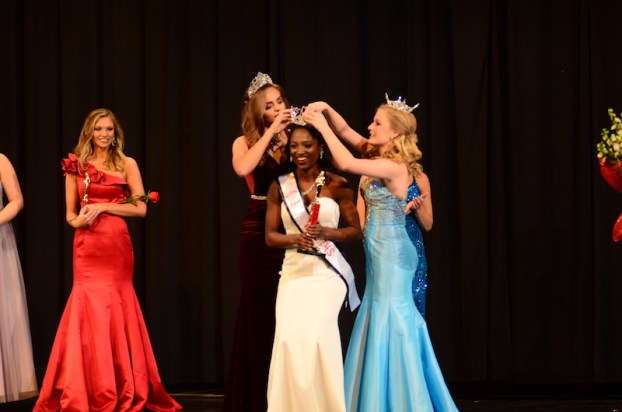 ALABASTER – Sixteen young women competed for the title of the 2018 Miss Thompson High School during the school’s annual pageant on the night of Saturday, Feb. 24. The pageant was hosted by THS TV, and students Constance McKnight and Ashley Ryan served as the masters of ceremonies.

“It was another great event. We had a lot of very talented and beautiful girls who were able to showcase what they can do to the community.” THS Principal Wesley Hester said. “These pageants are a great opportunity for our young ladies to build confidence and poise. It’s great to see them at their best.”

During the pageant, each contestant gave a brief introduction and showed off their gowns in the formalwear segment. Once the judges named the top eight, those contestants each answered a question to show off their quick-thinking skills. All contestants were also eligible for the titles of Miss Photogenic and Miss Congeniality.

THS senior Shelby Robinson was crowned by Workman as the 2018 Miss THS. Her sister, junior Kelsey Robinson, was named as the first runner up, and senior Katelyn Glover was the second runner up. Senior Caroline Morrison was named as Miss Photogenic, and junior Gracie Coker was awarded Miss Congeniality.

Robinson said she made the last-minute decision to compete. She said she was originally not planning to enter the pageant, but decided to participate one last time before she graduated.”

“There was just so much going on at the time,” Robinson said “My mom told me, ‘It’s your senior year, and you should go for it, because once May 22nd rolls around, you’ll wish you had done it.'”

Robinson said she was proud to receive the crown and enjoyed event and during the weeklong clinic that helped the contestants prepare. She said she hopes to use the next few months she has as Miss THS to influence her classmates in a positive way.

“It’s a huge honor. I’ve had so much fun this week,” Robinson said. “I try to be a positive person, and I hope that my positive attitude will influence other girls to do the pageant as well.”

While she has only ever participated yearly in the Miss THS pageants, Robinson said she plans to compete while attending college at Tennessee State University.

THS TV sponsor Brooke Dennis said the friendships that were built and strengthened among the contestants were some of the best parts of the pageant.

“This group of girls has been super supportive,” Dennis said. “They were really fun and sweet, and they all enjoyed each other.”

Dennis said this was the last Miss THS Pageant, and possibly one of the last events, that was held at the former THS building on Warrior Drive before the school moved to its newly-built campus on Monday, Feb. 26.

“It’s a little bittersweet,” Dennis said. “THS TV has done the pageant for more than five years, so to say goodbye to this place with such a great event is really special.”

Want to get a head-start on CVES kindergarten registration?