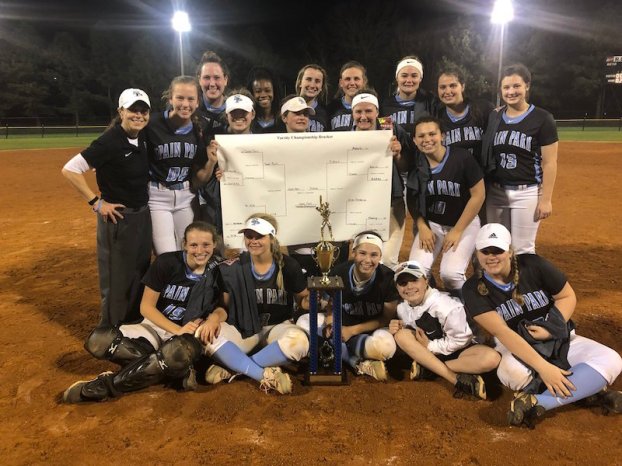 COLUMBUS, Ga. – For the second year in a row, the Spain Park Jaguars’ softball team reeled off six consecutive victories to defend its Sidney Cooper Invitational championship on Saturday, Feb. 24.

Last year that run was part of a 22-0 start to the season for the Jags, and while they had split their first two games of the season with a 4-3 win over Southside and a 3-0 loss to Chelsea, SPHS still carried the confidence of being the defending champs into the prestigious tournament.

The Jaguars went 2-0 on the first day of pool play on Friday, Feb. 23, by taking down Baker 7-6 and Smiths Station 1-0 to pick up two one-run wins. They came back the next morning to pick up one more pool-play win over Enterprise by a final score of 9-2.

That strong play through three games led to a high seed in the single elimination portion of the tournament.

Spain Park used a combined 15 runs against Geneva (10-0) and Alabama Christian (5-0), while also shutting out both teams, to advance to the championship game against Auburn High School at 9:30 p.m.

After a scoreless one-and-a-half innings in the title matchup, Spain Park came to the plate in the bottom of the second and opened up the scoring.

Thanks to two walks to Lindsay Parker and Savannah Rogers in the first two at bats, the Jags were already threatening with no outs. Caroline Kendrick then laid down a sacrifice bunt that was executed perfectly to move both Parker and Rogers into scoring position.

Despite falling behind in the count 0-2, Kate Campbell was able to battle back and pick up an RBI single to right field that brought courtesy runner Kate Thompson in for the score to give Spain Park a 1-0 lead.

During Mackenzie Thompson’s at bat, Campbell was able to steal second base, which led to a throwing error by the catcher, allowing Rogers to come in for the second and final run of the inning to give Spain Park a 2-0 lead.

While those were the only two runs the Jags scored in the game, it’s all of the cushion pitcher Annabelle Widra needed.

After allowing just two hits and striking out eight batters in the game before, Widra picked up right where she left off.

She pitched five consecutive scoreless innings before allowing one unearned run in the top of the sixth thanks to an error. She was able to bounce back to strike out the final batter of the game, however, during the next at bat thanks to three consecutive swings and misses.

Widra finished with a complete-game win in the championship allowing just three hits and one unearned run, while striking out 13 of the batters she faced. She had three 1-2-3 innings in the win as well.

Campbell finished the game 1-for-1 at the plate with an RBI. Kendrick also finished 1-for-1 in the game, while Maddie Majors was 1-for-2.

The Jags are now 7-1 on the season and will look to defend the Jag Classic starting Friday, March 2, after winning it for the first time in 2017.

By ALEC ETHEREDGE | Sports Editor ORANGE BEACH – For the second year in a row, Shelby County is the... read more