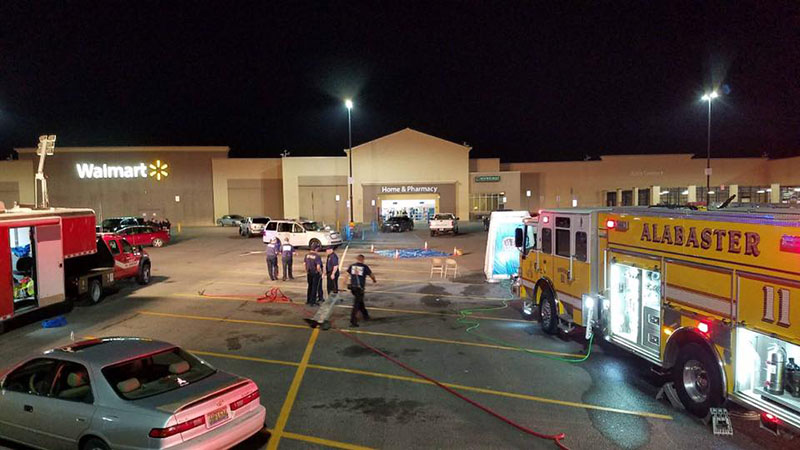 ALABASTER – A 43-year-old Sylacauga man has been charged with bringing a rolling meth lab into the Alabaster Walmart parking lot on Feb. 23 and causing a multi-agency response to clear and decontaminate the scene.

The Shelby County Drug Enforcement Task Force arrested Griffin Allen Thompson on Feb. 23 and charged him with one count of unlawful manufacture of a controlled substance, and one count of possession of drug paraphernalia.

Unlawful manufacture of a controlled substance is a Class A felony, and is punishable by up to life in prison upon conviction. As of Feb. 26, Thompson was being held in the Shelby County Jail on bonds totaling $251,000.

On the evening of Feb. 23, patrons and employees at the store approached an Alabaster police officer who was on his regular patrol at the store and reported Thompson was acting suspiciously.

The APD officer then located the suspect in a vehicle in the parking lot, and a police K-9 indicated there was a controlled substance in the car, said Task Force Commander Lt. Clay Hammac.

“What I hope the public sees in this is that they have a very engaged and proactive agency with the Alabaster Police Department,” Hammac said. “It’s not uncommon to find an officer or multiple officers throughout the retail district at any given time.”

After the K-9 hit on the vehicle, the APD alerted the Task Force, the Alabaster Fire Department and the Pelham Fire Department to help secure and decontaminate the scene. Hammac said Task Force officers discovered an active “shake and bake” meth lab in the suspect’s vehicle, and said the lab was dangerously close to exploding.

Dressed in Class A Hazmat suits, which is the highest level used by the Task Force, investigators were able to stabilize the lab and keep it from exploding or emitting potentially deadly vapors, Hammac said.

The AFD and PFD then decontaminated the Task Force investigators, following standard safety protocol, and the agencies declared the scene safe and reopened it to the public at about 9:30 p.m.

“This is an illustration of outstanding teamwork and great partnerships,” Hammac said. “I can’t stress this enough: The agencies did everything right. This was absolutely by the book.”