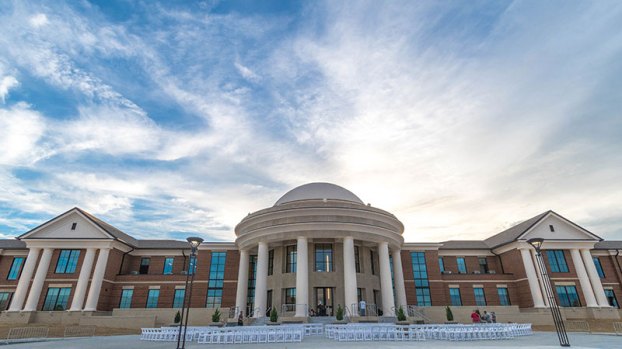 ALABASTER – After years of construction on the project, students are now officially attending classes at the new Thompson High School, and the first morning went off without a hitch, according to school leaders.

“Everything went smoothly, it went great. It was a little bit of adjustment with the traffic patterns, but nothing major,” Alabaster School Superintendent Dr. Wayne Vickers said after classes began at the new school on Feb. 26. “The students really seem to be excited.”

The students’ first day in at the new school came after a weekend of community celebration surrounding the massive new facility. On Feb. 24, ACS joined city, county and state leaders as they held a ribbon cutting ceremony for the school, followed by a community open house attended by thousands of Alabaster residents.

The following day on Feb. 25, THS students were allowed to walk the new THS to map out their classes before the first day of school, which helped to relieve confusion on Feb. 26.

On President’s Day weekend from Feb. 17-19, crews with the Lambert Transfer and Storage company worked to move the majority of the items from the old Thompson High School to the new one, and finalized the move leading up to the first day of classes.

The new THS originally was set to open to students when they returned from the Christmas break on Jan. 4, but the school did not yet have its certificate of occupancy at the time.

The 1,009-seat performing arts auditorium, indoor arena and sports facilities are not yet completed, and construction workers are entering the campus from the Kent Dairy Road entrance, are using a separate parking area and are segregated from the students while those areas are completed.

Students are only using the Thompson Road entrance to the new THS property, as the Kent Dairy Road entrance is still being used as a construction entrance. As with all schools in the city, an Alabaster police officer is directing traffic into and out of the school each day.

Highlights of the new building include the cafeteria, which seats 625 students in a variety of booth, high-top and restaurant-style tables. The media center is next to the cafeteria, and both it and the cafeteria look out into the school’s central courtyard.

An area in the central part of the academic building serves students with significant special needs, and includes a sensory room, a separate restroom and laundry area and a room set up like a traditional home designed to help students hone their life skills.

The athletic facilities will open in late spring, and will include five multipurpose practice fields, six tennis courts, a 5,293-seat football and soccer stadium, baseball and softball stadiums. The baseball and softball teams each will have their own field houses, and a 27,000-square-foot filed house will serve football, soccer, track and tennis teams. The athletic area also will have a 30,000-square-foot indoor multipurpose practice and weight training facility.

The Shelby County Commission is partnering with ACS to provide upgrades to the THS track and field complex, including a 444-seat bleacher, upgraded lighting, a restroom-concession stand building and official time recording at sanctioned events.