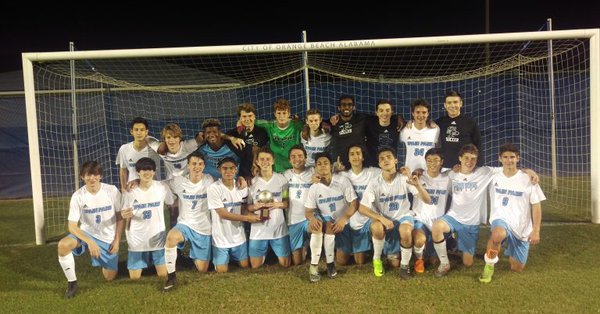 Spain Park’s boys and girls soccer teams both made it to the championship game of the Island Cup, while the boys won the title and the girls lost. (Contributed)

ORANGE BEACH – For the second year in a row, Shelby County is the home of an Island Cup Champion after the Spain Park boys’ soccer team brought home the title on Saturday, Feb. 24, by taking down St. Paul’s 2-0 Orange Beach Stadium.

While the boys had the strongest run in the tournament, the Spain Park girls also showed how competitive they can be by making it to the championship match as well.

They ended up losing a heartbreaking 1-0 game against John Carroll in the title match to close out an impressive run.

The Jaguars’ boys team started the tournament off with two consecutive wins by a combined score of 7-1 after taking down Grissom 3-0 and John Carroll 4-1.

After not being challenged in the first two games of the tournament, the Jags found themselves up against the defending champion Thompson Warriors.

Not only was it a rematch of last year’s championship match as Spain Park was looking for redemption, but for the second consecutive year the matchup went to penalty kicks.

Last year the two teams were tied 0-0 at the end of regulation before the Warriors pulled off a 3-0 shootout win, but in 2018 the roles were reversed.

Tied 3-3 at the end of regulation, Spain Park was able to get redemption with a 5-4 advantage in the shootout, which led the Jags to a 4-3 victory.

In the championship match against St. Paul’s, Spain Park was able to get two goals from A.J. Duggans off assists from Brooks Rice and some stellar play in goal from Justin Fisher to pick up a 2-0 shutout win over the Saints to bring home the championship.

Rice led the Jaguars throughout the tournament with five goals and five assists in four games. Reece Eberhardt also had a nice performance scoring three goals and adding three assists, including two key goals in the semifinal matchup against Thompson.

Duggans ended the tournament with four goals and two assists in his four games, including the only two goals in the championship.

Thompson’s boys had an impressive run that featured a lot of clutch play after taking down Huntsville (3-2) and Sparkman (2-1) by one goal, before losing in overtime to the Jags in the semis.

Lupe Villanueva ended the tournament with three goals, while Cole Hadley totaled three goals as well. Hadley was the only player to score in all three games for the Warriors.

Spain Park’s girls used an impressive and dominating run to the championship game, just as the boys did.

The Jags combined to beat Thompson and Davidson 15-1 in their first two games of the tournament, taking down the Warriors 5-1 and Davidson 10-0.

That set up a matchup against Huntsville in the semifinals where they were challenged slightly, but ended up holding on for a 3-1 win to punch a ticket to the championship matchup against John Carroll.

In the title game, John Carroll picked up one goal late in the first half off a corner kick to take a 1-0 advantage into the half.

In the second half, Spain Park was able to put together several great looks at the goal, but John Carroll goalkeeper Song Bowers was able to make some incredible saves to help the Cavaliers hold on for the 1-0 championship win.

It marked an incredible run for both the boys and girls as they combined for a goal differential of 31-7 through their eight games in the tournament.