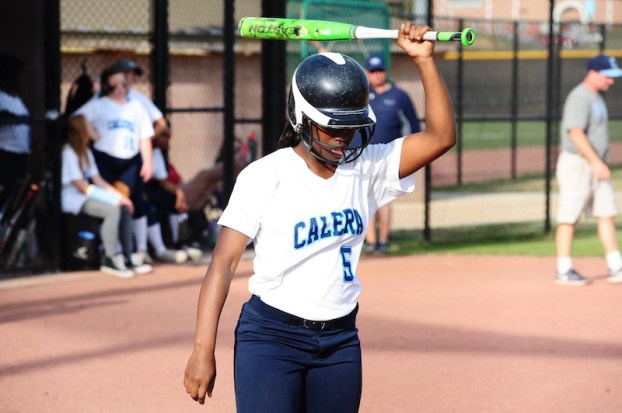 Michaella Landrum had a strong game at the plate and was part of the reason Calera was able to pull off a walk-off win against Oak Grove to redeem an opening-day loss. (File)

Calera wins with walk-off in extras

CALERA – Down to its last out, trailing 6-5, the Calera Eagles’ softball team started a two-out rally in the bottom of the eighth inning, before Bri Plocharczyk hit a hard ground ball to center field to bring in the game-winning run and lead the Eagles to a 7-6 walk-off win against Oak Grove on Monday, Feb. 26.

After two groundouts started the inning, Calera was able to put its next two batters on board thanks to a walk and an error. With those two runners on first and second, Kendall Douglas started the scoring with a hard-hit ball to left field that scored Payton McDonald.

With runners still on first and second after the base hit, and now tied 7-7, Plocharczyk nailed the second pitch she saw up the middle for the walk-off single that scored Alyssa Clark.

For most of the night, Calera seemed to have the game under control with a 2-0 lead through four innings and a 5-1 lead through five innings.

The Eagles scored two runs in the bottom of the third thanks to an RBI-double from Charley Clark and an RBI-single from Nicole Harrelson to take a 2-0 advantage.

After a run from Oak Grove in the top of the fifth, Calera answered in the bottom half of the inning with three runs. A Charley Clark double brought in one of those three runs, while a bases-clearing triple from Ashlynn Hamm drove in the other two to give the Eagles a 5-1 lead.

Oak Grove, however, answered in the top of sixth with three runs of its own to cut Calera’s lead to just one run. The Tigers used three consecutive singles and a ground out to pick up their three runs in the frame.

Calera went 1-2-3 in the bottom half of the inning, which allowed Oak Grove to come to the plate for their last chance in the top of the seventh. They capitalized with one run on an error by the Eagles which tied the game at 5-5.

Calera was unable to win the game in the bottom of the seventh, which sent the contest into extra innings.

The Tigers struck first in the top of the eighth thanks to some early-inning baserunners.

A walk and a single put two runners on and one in scoring position before an out had even been recorded. After a sacrifice bunt moved both baserunners into scoring position, Calera intentionally walked the next batter to load the bases to set up a forced out situation.

A fielder’s choice allowed one run to score during the next at bat, which gave the Tigers a 6-5 lead and kept the bases loaded with just one out in the inning.

Hamm, who was in the circle at this point to relieve Plocharczyk, got exactly what she wanted during the next at bat. She got the Oak Grove batter to ground into a double play to end the threat and the inning for the Tigers.

It looked like Oak Grove was going to escape after getting two quick outs in just five pitches to start the bottom of the eighth, but that’s when McDonald came to the plate and battled an eight-pitch at bat before eventually drawing a walk to spark her team toward the comeback win.