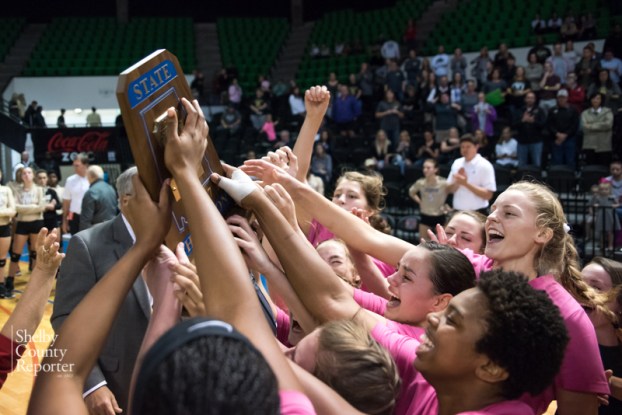 The PHS volleyball team was recognized by the Pelham BOE for winning the Class 6A volleyball state championship. (File)

PELHAM – Pelham High School’s varsity volleyball team was recognized for winning the Class 6A volleyball state championship at a Pelham Board of Education meeting on Monday, Feb. 26.

“As a volleyball dad, I can say that the final game was as good as any volleyball game that I’ve ever seen,” Pelham City Schools Superintendent Dr. Scott Coefield said as all members of the team stood on the stage in the PHS auditorium. “Winning a state title is a difficult task.”

Each of the players received a certificate recognizing their accomplishment as well as championship rings. The audience also watched a slide show with pictures and video from the championship game.

The team boasts a 41-9 record for the 2017 season and was undefeated at home. Several members of the team posted double-digit kills in the championship game and the team was ranked among the top 10 for most of the season. Emorie Long was named as the tournament MVP after leading Pelham all season long as one of six seniors.

“Looking back on the season, the best part about this group is that they played as a team,” said head coach Perry Robinson.

After the volleyball team was recognized, members of Pelham High School’s Principal’s Advisory Board, which is made up of ninth through 12th graders, shared information about the positive things happening at PHS. The students talked about the Craft Academy, the biomedical career tech program, PHS Debate, the National Science Honor Society, band, choir, art classes, Peer Helpers, Pelham Unidos and so much more. The student-led presentation offered a glimpse into life as a PHS student.

-The board approved two personnel items, a resignation and a transfer.

-The board approved the 2018-19 Zoning Map for Pelham City Schools.

-The board approved the PHS bell schedule.

-The board approved the Course Selection Guide for Pelham High School and Pelham Park Middle School.

-The board approved the calendar for the 2018-19 school year.

-The board approved a contract with Mary-Margaret Newland for speech and language evaluation services.

-The board approved a contract with Crestwood Educational Consultants LLC for testing, evaluation and consulting services.

-The board approved a contract with Child’s Play Therapy Center LLC for speech therapy evaluation.

The next Pelham Board of Education meeting will be at 6:30 p.m. on March 19 at Pelham Oaks Elementary.

COLUMBIANA – Voting in Shelby County is undergoing some significant changes, as precinct changes and the purchase of tablets to... read more