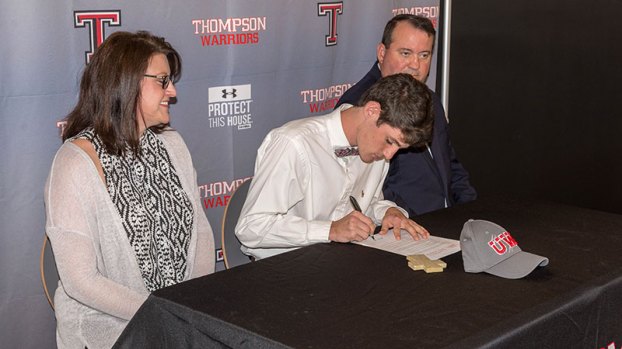 Thompson High School soccer player Jackson Hall, center, signs a scholarship with the University of West Alabama during a ceremony in the THS cafeteria on Feb. 27. (Reporter Photo/Neal Wagner)

ALABASTER – The Thompson High School soccer program continued its lengthy tradition of sending players to the next level on Feb. 27, as one of the team’s standouts signed a scholarship to play in college.

THS senior Jackson Hall signed his letter of intent to play with the University of West Alabama Tigers during a ceremony in the school’s cafeteria while surrounded by friends, family members, teammates and coaches. Hall became the first THS athlete to sign a scholarship in the new Thompson High building after it opened to students the previous day.

“Obviously, this is a special day for Jackson and his family. He’s made a big impact over the last few years” said THS soccer coach Rusty Cowley. “He’s a great asset for us, and he will leave really big shoes for our younger kids to fill.

“As he goes to UWA, I can speak from experience that he’s in great hands. They’ve had some great success, and I think Jackson will add to that success,” Cowley said. “For Jackson and all of his family, congratulations.”

Hall has been with the THS soccer program since transferring to THS from Briarwood his sophomore year. Cowley said it took “about 10 to 15 minutes of practice with our JV team” for him to realize Hall’s skill on the pitch.

“I just want to express my appreciation for everyone coming out today,” Hall said before signing the scholarship. “Glory to God, because everything is possible through him. I’m really excited that I get to pursue my education and further my career at West Alabama. Go Tigers.”

By ALEC ETHEREDGE | Sports Editor ALABASTER – The Thompson softball team went 31-11-3 in 2017 to give the program... read more