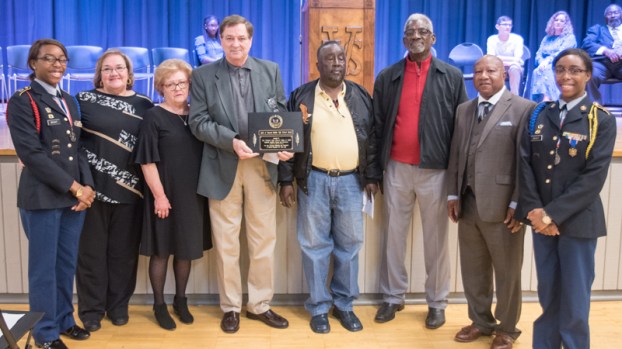 VINCENT – The first integrated class at Vincent High School 50 years ago was recognized at a Black History Month assembly on Tuesday, Feb. 27, and a member of that class urged current students to strive for unity and love.

Principal Michele Edwards presented the annual Spirit of Vincent Middle High School Award to the school’s class of 1968, the first integrated class, on its 50th anniversary.

“We will keep this plaque and hang it in our halls to remind ourselves of the community bonds and relationships you stood for,” Edwards said.

JROTC Cadets Toni and Tion Wright led the audience, which included all the school’s students, in the Pledge of Allegiance, and SGA President Broxton Sanders welcomed those in attendance.

“Let us remember the past and how it has shaped our respective futures,” Sanders said and added that it is even more important to learn from the past and be a “shining example of what can happen when we work together for the good of all.”

Teacher Dawn Howard, a member of the VHS Class of 1994, thanked fellow teacher Sam McKissick for his work in organizing the program and talked about Martin Luther King Jr. and his civil rights efforts, reading a quote from a 1965 speech in Selma: “Deep down in our non-violent creed is the conviction there are some things so dear, some things so precious, some things so eternally true, that they’re worth dying for.”

“Dr. King took that stand,” Howard said. “His life and his resolve can be lessons for us today.”

“It was not an easy task, but I think we can all be proud of the Vincent community that integration took place here without riots in the streets,” McKissick said and noted that Vincent athletes played in the first integrated football game in Shelby County and the first integrated Vincent basketball team won county and district championships. “I see us all together 50 years later. I believe we are the reality of Dr. King’s dream.”

Middle school SGA President Griffin Martin introduced the speaker, the Rev. Charles Mitchell, a member of the class of 1968 who has been pastor of Mount Olive Baptist Church since 1979.

Mitchell said he and other male students had been attending the Shelby County Training School but moved to Vincent High School because they were no longer bussed to Columbiana.

“I can tell you today that there were no major incidents,” Mitchell said. “We came with one thing in mind: to learn. Our whole reason for going to school was to get an education.”

Mitchell said he is saddened by violence in schools.

“We can only make this country a great country if we put our best foot forward,” he said. “I want you to learn today how to love more. Know every man before you decide who he is.