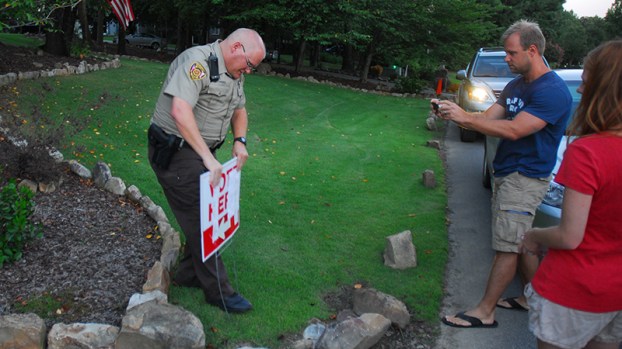 Saddle Lake Farms residents view the election results following a 2014 vote on whether to annex into the city of Alabaster. Alabaster City Council members voted to rezone the neighborhood during a Feb. 26 meeting. (File)

ALABASTER – A large neighborhood annexed into Alabaster after its residents voted to do so in 2014 now has a more permanent zoning, after the City Council agreed to remove the “placeholder” zoning originally placed on the subdivision a few years ago.

Council members voted during their Feb. 26 meeting to rezone the about 450-resident Saddle Lake Farms subdivision from municipal reserve to a planned residential development zoning. The city typically places a municipal reserve zoning on all newly annexed properties until it can assign a more permanent zoning, city leaders said.

The rezoning came to the council with the recommendation of the city’s Planning and Zoning Commission, which recently voted in favor of the plan. The commission recommended a planned residential development zoning because none of the city’s ordinary residential zoning categories lined up with the zoning Saddle Lake had when it was still in unincorporated Shelby County before annexing into the city, said Council President Scott Brakefield.

“We are trying to bring it in and keep it essentially the same as what is out there now,” Brakefield said.

“The city has tried extensively to create a zoning that is the same as what the homeowners out there bought into,” Alabaster City Attorney Jeff Brumlow added.

With the planned residential development zoning, the city also was required to pass a neighborhood plan for the area, which Brumlow said mirrors Saddle Lake Farms’ existing restrictive covenants. The rezoning and neighborhood plan will govern the type of future development or renovations allowed on developed or undeveloped lots in the subdivision.

Saddle Lake Farms residents voted on July 29, 2014, to annex into the city by a vote of 211-54 primarily so the neighborhood’s children could continue to attend Alabaster schools after the Alabaster City School System separated from the Shelby County School System.

The 2014 vote came after Shelby County Probate Judge Jim Fuhrmeister approved a petition – the second one submitted to the Probate Court by Saddle Lake homeowners – to call the election. In May 2014, Fuhrmeister ruled the original Saddle Lake petition did not have enough signatures to allow him to set an election on the matter.

FROM STAFF REPORTS The UAB International Adoption Clinic at Children’s of Alabama will host its Adoption Boot Camp on Saturday,... read more