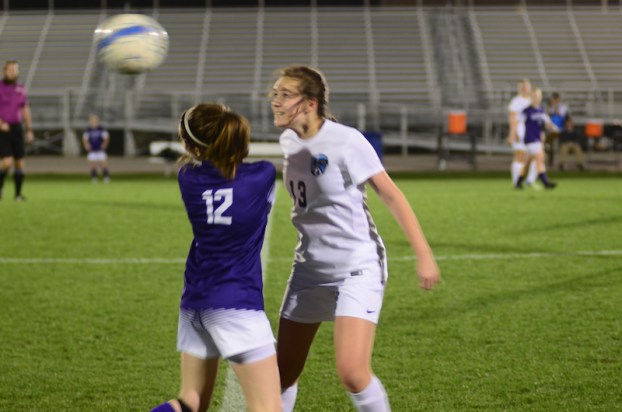 Helena’s Christian Nahrgang (13) heads the ball in a game against Hueytown on Feb. 27. The Huskies won the match 8-1. (Reporter Photo/Graham Brooks)

HELENA–The Helena Huskies girls soccer team is off to their best start in years largely due to the fact the Huskies are mixing older, experienced talent with several underclassmen.

On Tuesday, Feb. 27, the Huskies took on the Hueytown Golden Gophers and exploded for six second half goals to take an 8-1 win.

In the win over Hueytown, Helena was led by freshman Taylor Davis, eighth grader Bailee Washington and junior Roby Boatman.

Davis finished with three goals while Washington and Boatman finished with two goals apiece. Freshman Gracey Thornton also scored a goal to give the Huskies their highest goal total in a game so far this season.

In the net, Helena senior goalie Alexis Gardner was a perfect 3-for-3 on saves.

Head coach Clif Naron said he believes some of the younger players have helped sew things up with the already existing talent the Huskies have.

In the last three games, Helena has outscored opponents 21-2.

Helena will look to build on the momentum the week of March 5, as the Huskies will take on area opponents Chelsea and Pelham.

The Huskies will play Chelsea on Tuesday, March 6 and Pelham Friday, March 9 at home.