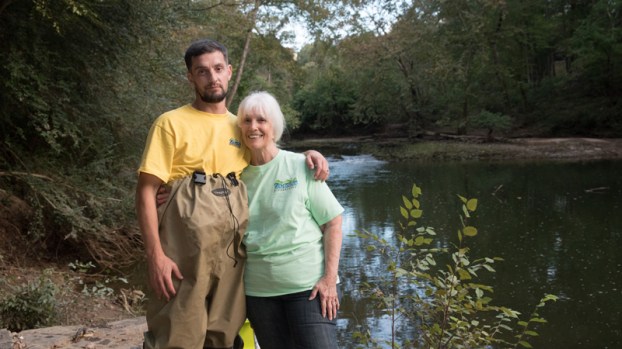 David Butler, left, joined Myra Crawford as a Riverkeeper after he noticed issues with the river in a recreational capacity. 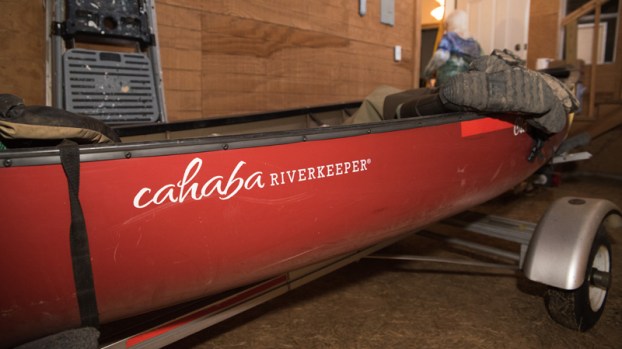 Cahaba Riverkeeper is dedicated to the preservation of the Cahaba River. 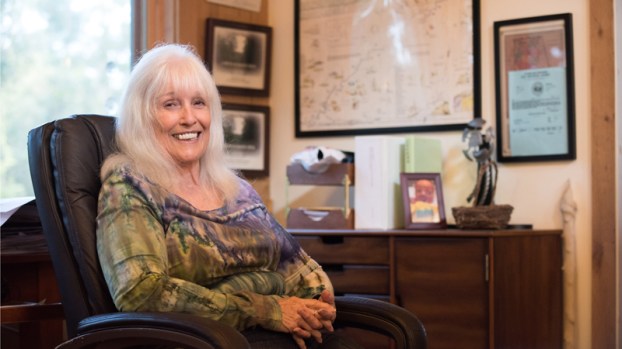 Myra Crawford taught her children to swim and fish in the Cahaba River near their home, but concerns about the future of the river led her to found Cahaba Riverkeeper. 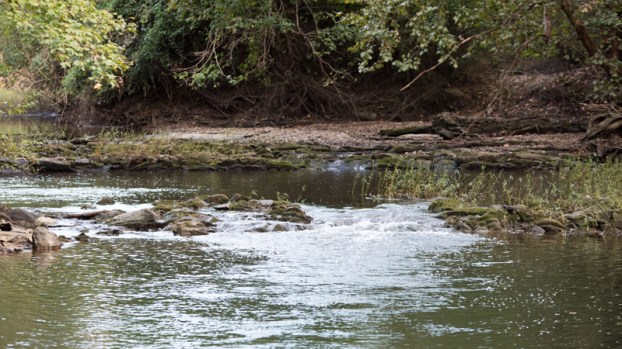 The Cahaba River is considered one of the most important natural resources in Alabama. 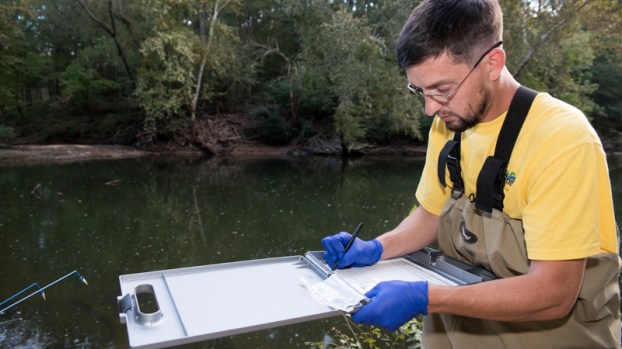 Butler leads a team that tests water in the Cahaba River to produce the Swim Guide resource for recreational users. 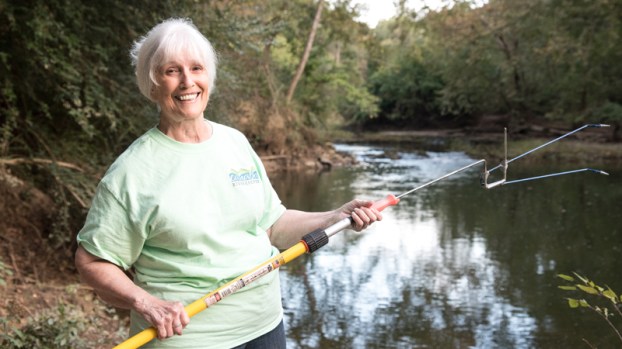 Crawford decided to advocate for the Cahaba River after retiring from a career as professor and director at the UAB School of Medicine. 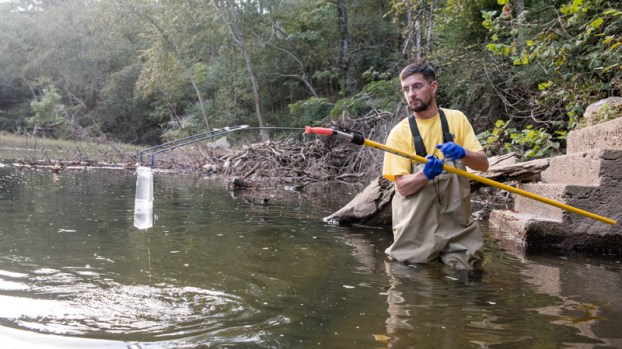 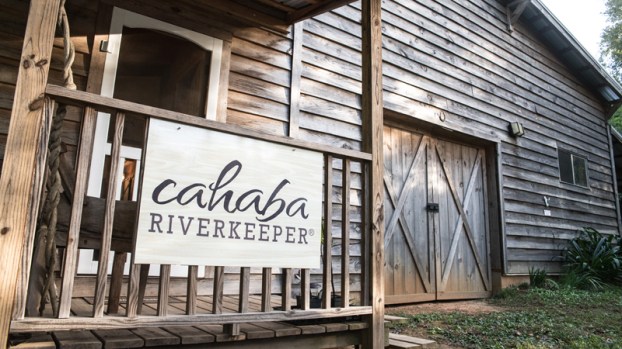 The Cahaba Riverkeeper office was opened in 2013 in a remodeled barn.

Dr. Myra Crawford has lived about half a mile from the Cahaba River for about 50 years. Crawford and her children created memories in the river, and her time and effort are focused on ensuring future generations have the same opportunity.

The confluence of Crawford’s retirement from her first career, a river in peril, her relationship with the Cahaba and a need for scientific data about it has led to the founding and flourishing of the Cahaba Riverkeeper organization.

Crawford retired as clinical research professor and director of the research division and the Human Energetics Assessment Laboratory in the Department of Family and Community Medicine at UAB’s School of Medicine.

“It was worse than being on vacation,” Crawford said. “There was nothing to do. I was bored.

“After my retirement, I was opining about what I could do to be of service to my community, and my son suggested that I might look to the Cahaba, that no one was taking care of it. I realized that no one was doing the science of the river on a regular basis and communicating that effectively to the public.”

Development and pollution have changed the river—which is considered one of Alabama’s and Shelby County’s most important natural resources—but a lack of scientific research about the Cahaba makes it difficult to say how much damage has been done—and how much impact people are continuing to have.

That’s where the Cahaba Riverkeeper organization, founded by Dr. Myra Crawford in 2009, hopes to help.

Among Crawford’s early efforts was the Swim Guide, which began in 2014 with eight locations and has since grown to include 16 locations.

Water from the Cahaba River and main tributaries, such as Shades Creek, Buck Creek and the Little Cahaba River, at popular recreation sites is tested for its quality and any potential risks to swimmers during the summer months.

Results are posted on the CahabaRiverkeeper.org website and social media.

“Shortly after I started, people were calling asking is it safe to swim at certain locations,” Crawford said. “We would say, ‘I don’t know.’ Then we thought, ‘We’re scientists; we can figure it out.’”

High levels of E. coli are a common problem, while the testing also reports dissolved oxygen and pH levels.

During summer 2017, the organization issued 57 high E. coli alerts and 44 moderately high alerts. There was not a single week where all the test sites received a “green” code for low E. coli.

“We were astounded that we kept finding all of this E. coli,” Crawford said. “Sure enough, it’s not just muddy. We don’t know where that comes from. We would like to DNA test to find the source.”

The conditions typical with water with high levels of E. coli suggest the presence of other pathogens, said David Butler with the Cahaba Riverkeeper.

The water testing began using a program designed for ease of use, making it accessible by anyone interested in helping, but in 2016, a partnership with the Coosa Riverkeeper improved the testing.

Now, Coosa Riverkeeper is assisting its Cahaba counterpart with the creation of its own lab.

“That will give us a lot more flexibility,” Butler said. “Before, we would have to schedule around them and drive to their office.”

Butler leads the “South team” during water testing while Dr. Shaun Crawford, Myra’s son who grew up around the river and suggested its conservation as a worthwhile endeavor to his mother, leads the “North team.”

Crawford has lived on 10 acres near the Cahaba River in a passive solar home for most of her adult life. She is a mother of two daughters and a son, Shaun, an environmental scientist.

One of her daughters, Crystal Corcoran, lives in the area and volunteers with Cahaba Riverkeeper.

Crawford was a member of the advisory council of the Black Warrior Riverkeeper and a founding member of the board of the Green Resource Center for Alabama.

She has worked as a newspaper and magazine journalist and as a technical writer and editor. She has published more than 100 scientific and commercial articles, as well as works of fiction. She has traveled extensively in China, Tibet, Italy, Spain, the United Kingdom, Central Europe, and Central and South Americas.

Butler joined the organization in 2010 and earned the Riverkeeper designation in 2015.

Born in Birmingham and raised in Kentucky, Butler worked in New York for a financial research company for a time—a career far removed from river conservation.

While studying journalism at the University of Alabama, Butler spent time at Alabama Small Boats, which rented canoes, and later guided trips down the Cahaba.

“I started out as a recreational user of the river,” he said. “I was seeing more and more issues. I didn’t know what the issue was, you could just look and see something was wrong. People would ask if it was safe for swim or eat fish out of the river. I didn’t know. It’s not like you could just go Google it. Basic information didn’t exist anywhere. I didn’t ever have an answer for those people.”

Butler found out about Cahaba Riverkeeper, volunteered with the organization, joined the board then became a Riverkeeper himself.

“They were doing things that really no else was doing, and that’s how I gravitated to Riverkeeper,” Butler said. “You still learn about it every day. It’s been an amazing, amazing thing.”

The main stem of the Cahaba River is 193 miles long, with another 150 miles of the main tributaries. The watershed covers about 1,900 square miles.

Cahaba Riverkeeper has only two staff members—Crawford and David Butler, who is the only paid worker—but a team of volunteers help with the work.

“We’re so small and we have such big plans, we couldn’t do what we do without a lot of volunteers,” Butler said.

The small staff size allows Cahaba Riverkeeper to be responsive to whatever needs arise.

“We’re like the kayak instead of the Queen Mary,” Crawford said.

Also, the organization can spend most of its time on research instead of fundraising to fund a large payroll.

Though most of the Cahaba Riverkeeper’s funding is through grants, fundraisers are necessary. The organization’s largest each year is the Duck Derby held in Leeds. Memberships, art prints and T-shirts are also sold to raise generate money.

Annual river clean-ups are held in Bibb County and Helena, where an average of about 3,500 pounds of garbage is collected each year.

Cahaba Riverkeeper has been at the forefront of environmental efforts during recent crises.

A Pelham wastewater treatment plant lost power and overflowed in July 2015, spilling about 10,000 gallons of sewage into the river.

This incident led to Cahaba Riverkeeper pushing for a more robust public notice system through a petition to the Alabama Department of Environmental Management.

In September 2016, the Carmeuse Lime and Stone Longview facility in Saginaw near Alabaster was found to have significantly polluted Buck Creek. The creek had turned a murky white color, and no aquatic life was observed downstream.

Alabama regulations dictate that discharges should not raise pH above 8.5.

“We don’t set out to punish people,” Crawford said. “We hope that we’ve earned a reputation of being fair. In some cases, companies have accepted responsibility.”

Later in the same month, a ruptured pipeline leaked about 250,000 gallons of gasoline in a rural area near Helena. Colonial Pipeline invited Cahaba Riverkeeper to be the only environmental organization to observe and assist with the clean-up effort.

“They worked hard to keep it from getting in the river,” Crawford said. “And we were able to observe them working hard. We weren’t just on the other side of the fence throwing rocks. That relationship taught us the wisdom of talking to people.”

Though it does not generate news headlines, the accumulation of sediment over time is the Cahaba River’s most significant problem, as development in the river’s watershed removes vegetation and leads to rainwater washing sediment into the river.

Crawford estimates the river needs a 48-percent reduction in sediment, but there is no established baseline. Most of the data on the river is 25 years old.

So, one of Cahaba Riverkeeper’s upcoming efforts will entail building a database by mapping and photographing the river. The plan is for the information to be accessible by the public, which will even be able to make contributions.

“We want to take science to the people and interpret it in a way that people can understand,” Crawford said.