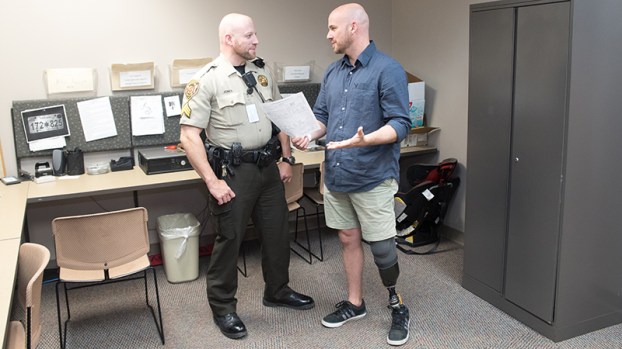 Shelby County Sheriff's Office Criminal Investigation Division deputy Matt Smith, right, works with deputy Jones on a case. Smith, who lost a portion of his left leg in an April 2017 motorcycle crash, is eyeing a return to the SCSO patrol division, where he was before the crash. (Reporter Photo/Keith McCoy)

CHELSEA – As his Harley Davidson motorcycle collided with the side of the vehicle, off-duty Shelby County Sheriff’s Office deputy Matt Smith unfortunately remembered every detail as he was thrown through the air onto the rough asphalt of U.S. 280.

Just a few seconds earlier, Smith watched in slow motion as the vehicle driven by a 19-year-old girl pulled onto 280 from Chelsea Park Drive as he came to the sudden realization his life would not be the same from this point forward.

“It was right there by the clock tower. I had about a tenth of a second to decide what to do,” Smith said as he recalled the April 18, 2017, event with vivid clarity. “I started to lay the bike down, but there wasn’t enough distance to get it all the way down.”

Smith’s Harley smashed into the car at 8:01 p.m. as he felt a tremendous pain in his left leg. After sliding about 200 feet on U.S. 280, Smith came to a rest and immediately knew his leg injury was severe.

“It basically severed my left leg several inches above my ankle. It felt like an explosion,” Smith said. “I don’t mean to get too graphic, but it was only hanging on by a few tendons. When I slid on Highway 280, the bone was actually dragging on the pavement. I was wearing full protective gear, so my leg was really my only injury.

“I didn’t black out or go into shock, which meant I could feel everything,” Smith added.

What had begun as a simple trip to a friend’s house to put on a new set of handlebars and make some changes to the motorcycle’s speedometer had turned into an event similar to the hundreds of calls Smith had responded to during his 14 years in law enforcement.

Some of the first people on the scene following the collision helped by calling 911 and alerting other drivers on the road, but others inadvertently did more harm than good.

“There were some young people on the scene who saw my leg and were screaming ‘Oh, man,’” Smith said, mimicking the bystanders’ reactions. “When you’re lying there in the road and you hear that … it doesn’t help.”

But one person on the scene was different.

In a circumstance Smith said he will forever attribute to divine intervention, Grandview trauma nurse Myers Hurtt happened to be passing by shortly after the accident.

Hurtt, who was traveling on U.S. 280 on the way back from her daughter’s softball game, saw the crash scene and noticed first responders had not yet arrived to handle the situation.

“It was a bigger impact than I thought when I first got out of my car,” Hurtt said. “It was pretty bad. Being a trauma nurse, I’ve seen some bad ones, but that was the first time I had ever been the first one on the scene. His sock was pretty much the only thing holding his leg on.”

Despite her surprise at the severity of Smith’s injury, Hurtt did everything she could to keep Smith from seeing it.

While still trying to process what he had just been through, Smith said Hurtt was exactly who he needed. At the time, Smith did not know Hurtt’s name, only she was “wearing something pink.”

“She positioned my body where I couldn’t really see my leg. She made things so much better,” Smith said. “She was like an angel, and I can’t imagine what would have happened if she wouldn’t have been there.”

A brother in need

Every time an SCSO deputy, whether they’re on duty or not, is injured, the department’s administrative staff gets a page. Whenever he receives such a page, SCSO Chief Deputy Chris George knows it isn’t good.

“I hate to say this, but my first thought was ‘Is he alive?’” George said. “I put my uniform on, and when I got there, I think I actually jumped the curb with my car.”

While he was relieved to see Smith still alive, George knew his fellow law enforcement officer had a rough road ahead. Knowing this, George, Shelby County Sheriff John Samaniego and SCSO Chaplain Mike DeHart stayed by his side as he was transported to UAB Hospital.

Once Smith was at UAB, the medical staff presented him with a choice: Either have a portion of his leg amputated or undergo a series of nine or 10 surgeries without a guarantee his leg could be saved.

“It’s hard to think rationally when you’re in that much pain,” Smith said. “But I knew my best bet was to amputate.”

“You didn’t hesitate for a second. You said ‘Cut it off,’ just like that,” George said to Smith.

Smith underwent three surgeries the first six days he was in the hospital to stabilize the amputation before he was released from UAB after a nine-day stay.

On May 24, just days before he was set to be fitted for a prosthetic leg, Smith returned to the hospital, where medical staff determined the wound wasn’t healing properly. Doctors discovered his leg had become infected, and had to conduct another surgery to keep Smith from losing the rest of his leg.

After undergoing his fourth surgery, Smith had to wait another couple of months before he could be fitted for a prosthetic.

While Smith was facing the gamut of hardships, George and Samaniego removed one potential worry from his life.

“The sheriff came in the day after my crash and said ‘It doesn’t matter how long it takes, you will still have a job when you get through this. We are going to leave your patrol car in your driveway to show you we haven’t forgotten about you,’” Smith said.

Every day he was in the hospital, fellow deputies from his shift and SCSO administrative staff members came to visit him.

“The Sheriff’s Office was behind me 100 percent,” Smith said.

Smith’s hospital room was filled with more than just his coworkers, family members and friends. In some cases, Smith didn’t even know the visitors.

“I can’t tell you how many people came to the hospital to see me after they heard what happened,” Smith said, noting he particularly had high support from Chelsea residents. “Sometimes, it was just someone I had met once at the gas station. The support they gave me was overwhelming.”

In addition to visiting him in the hospital, Chelsea’s residents took it upon themselves to establish a Gofundme.com account to raise money to help the Smith family adjust to Matt’s injury. In only a few days, the account had surpassed its original goal of $1,000, and in a few months, it had topped $10,000.

“People I didn’t even know were donating,” Smith said. “I would have had a much worse time mentally without the community’s support.”

Local builder Jack Donovan, who specializes in designing homes for individuals with disabilities, collected material donations and made several renovations to the master bathroom in Smith’s house to make it more easily accessible by wheelchair.

The congregation of Morningstar United Methodist Church, of which Smith was not even a member, took up offerings for several weeks to help Smith and his family.

In talking with others who have lost a limb, Smith said he has yet to find anyone with as much support he has received.

While the community’s support meant the world to Smith and his family while he was recovering, something bigger helped him maintain a positive spirit.

“I’d call myself a Christian. I’ve always believed in Jesus, and he has taken care of me in my 14 years in law enforcement,” Smith said. “I would say my faith in Jesus Christ has been huge throughout everything.”

Two months after the accident, coincidence – or possibly a higher power – brought Smith face-to-face with the person who possibly saved his life on April 18.

While Smith and his family were at Let’s Play off U.S. 280, a woman walked up to him and asked if he was Matt Smith. She then identified herself as Myers Hurtt.

“It was really emotional. My wife and I both gave her a hug,” Smith said. “In our eyes, she was a real-life angel.”

“I wasn’t sure it was him, but I remembered his eyes and his shaved head,” Hurtt said. “When I asked if he was Matt Smith, he just kind of lost it.”

Since then, the Smith family has remained in touch with Hurtt. While she said she was happy to help, she shies away from the spotlight.

“I don’t see myself that way,” Hurtt said of Smith calling her an angel. “I just happened to be in the right place at the right time. Some higher power put me right there where I needed to be, and I just did what I was trained to do.”

Smith was eager to return to duty at the Sheriff’s Office. When he showed up to begin light duty in the department’s Criminal Investigation Division in July, he hadn’t even received his prosthetic leg yet.

Now, Smith is eyeing a return to the department’s patrol division, where he was before the accident.

“I want to go back to the road to prove I can go back. I want to prove that this is not a disability for me. It’s just a minor setback,” Smith said. “All the things I wanted to do before the accident, like skydiving and snowboarding, I’m still planning to do. I’m still the same Matt, I just have a prosthetic leg.”

He has begun running and working out again, like he and his wife did before the accident, and he is now training to run a half-marathon followed by a marathon later.

“If I can do that (half-marathon), the goal is to move on to a marathon after that,” Smith said. “That is going to be a huge challenge.”

While Smith has not decided if he will ever ride a motorcycle again, he is sure about one thing: Forgiveness. In late 2017, Smith was awaiting the finalization of the insurance claims preventing him from reaching out to the young driver who pulled out in front of him.

“Once that’s all over, I want to reach out to the girl who hit me and tell her that, if she’s still upset about it, not to worry about it. I honestly believe it was an honest mistake, and as time passes, you realize it’s not the end of the world.

“There’s no reason for me to stay angry,” Smith added. “God has forgiven me, and I have definitely forgiven her.”