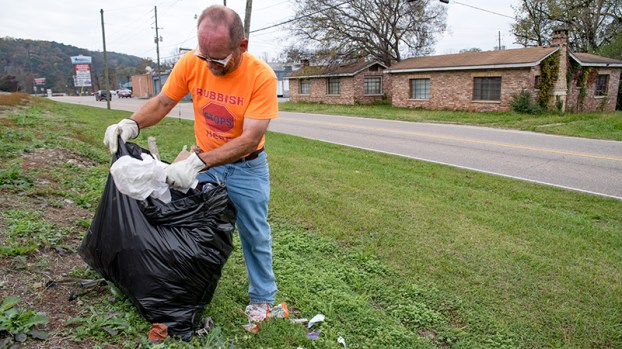 John Ellison picks up trash along First Street Southwest in Alabaster. Ellison spends much of his free time giving back to others, especially the city's first responders. (Reporter Photo/Keith McCoy)

ALABASTER – John Ellison quietly walks along Shelby County 17 in Maylene on a warm fall morning, stopping every few feet to snag a piece of trash on the side of the roadway with an extendable grabber he holds in his gloved hands. His bright orange shirt reading “Rubbish stops here” shines as a beacon to passing motorists as he places the trash into a rapidly filling black garbage bag he’s carrying with him.

“It’s been cleaned like four times now, and it’s a mess again,” 55-year-old Ellison said of the stretch of highway. “I cleaned it up not too long ago, and now there’s enough trash out there to fill several bags. It’s a shame.”

Knowing all of his hard work will be undone possibly in a matter of days, Ellison is not deterred. As he is often a one-man pickup crew working to combat roadside litter, he is already making plans to head back out to the road the same time the following week.

“If you can see trash on the side of the road while you’re driving, you can imagine how much is down there in the ditch,” Ellison said. “Cigarette butts are the worst. It’s easy to pick up paper, but it’s so hard to get all of those tiny cigarette butts. There are so many of them.”

What originally began as a simple way to get a little more exercise every week in early 2017 quickly turned into a passion for Ellison. Every week – and sometimes multiple times per week – Ellison parks his white Ford Focus at the end of a busy Alabaster highway and walks up and down the side of the roadway while collecting trash carelessly tossed from moving vehicles.

“Alabaster has grown up so fast that if you don’t stay ahead of this problem, you’ll be living in a city dump before you know it,” Ellison said. “I wish the people who litter would come out and help pick it up at least once to show them ‘We’ve got people out here cleaning, and you’re coming right behind them and throwing more trash out.’”

Ellison has been living in the Alabaster community nearly his entire life, and has always worked to make his city a better place. In addition to working with the Carmeuse Lime company in Alabaster for many years, Ellison has volunteered countless hours to showing appreciation for local first responders and cleaning up trash on the city’s roadways.

“Several months ago, I got tired of sitting around the house all the time. I needed to do something to get some exercise, so I figured I might as well pick up trash while I’m doing it,” Ellison said in a matter-of-fact tone. “Time just flies while you’re out there cleaning. Sometimes I’ll realize the sun is going down, and I’ll get a call from my wife asking me if I’m coming home.”

Ellison estimates he has picked up “hundreds” of bags of trash since early 2017, and even set out trash cans along the side of Smokey Road in an effort to cut down on the rubbish littering the highway.

Although Ellison completes the majority of his roadside cleaning missions solo, he occasionally has volunteers who join him.

Ellison’s efforts have not gone unnoticed by those in the community. While he admits he is sometimes heckled by passersby while he is cleaning, the vast majority of folks who interact with him are grateful, he said.

“I know a lot of people laugh at what I do – that doesn’t bother me at all. But I also have a lot of people who will stop and pray with me, thank me, bring me water or Gatorade. That part is really a blessing,” Ellison said.

A little more than three years ago, law enforcement agencies across the nation were suffering a crisis of public perception. As officer-involved tragedies unfolded in other parts of the United States, the effects were even being felt in Shelby County.

“With all that was going on with the shootings (in Missouri and Louisiana), we wanted to show our officers here that we really supported them,” Ellison said.

With that idea in mind, Ellison began recruiting others to his cause. Among them was fellow Alabaster resident Peg Kent Scott, who helped Ellison found the Alabaster Public Servants Foundation in 2014.

“The first thing we did was on Memorial Day. He bought sandwiches and took them to all the Alabaster police officers and firefighters. Then, on the Fourth of July, I bought barbecue plates for them,” Scott said. “I told John, ‘We can’t keep footing the bill for everything,’ so we posted it online and asked for people to help out. People were so nice with donating plates, money, anything we needed.

Since then, the Public Servants Foundation has become a regular fixture in the Alabaster police and fire departments, bringing everything from pallets of water and Gatorade to meals for an entire shift on holidays.

And in the officers’ and firefighters’ eyes, the foundation members are always a welcome sight.

“John and his group are just fabulous people. I can’t speak highly enough of what they’ve done for us,” said Alabaster Police Chief Curtis Rigney. “Every time we see them coming, it puts a smile on our faces. Those are good people who want to make Alabaster a better place to live.

“In my mind, they are heroes’ heroes.”

While the foundation began in response to a national tragedy, it has remained strong because of a simple philosophy.

“That’s the reason I like doing what I’m doing,” Ellison said.

Despite the often hot, grueling task of picking up trash along the side of a highway and carrying dozens of water bottles into fire and police stations, the Ellison does not see himself stepping back from the two tasks anytime soon.

The next step for the Public Servants Foundation and Ellison’s personal trash-removal crusade have one major similarity: More people.

“I’d like to see us get our tax-free status so we can have money to do things instead of having to beg for it all the time,” Scott said of the Public Servants Foundation. “And we’d also like to see more people who want to help step up and say ‘I’ll take this.’”

Ellison said he is ready to equip more volunteers with everything from garbage bags to safety gloves and vests.

“I’d like to see Alabaster be a lot cleaner. If I’m able to pick up eight or nine bags by myself each time, you can imagine what a bigger group could do,” Ellison said. “But even if it’s just me doing it, I’ll keep going as long as the good Lord sees fit.”

Dr. Myra Crawford has lived about half a mile from the Cahaba River for about 50 years. Crawford and her... read more