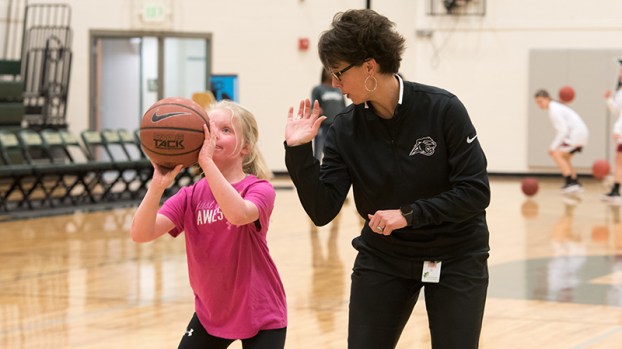 PELHAM – Kim Kiel is dedicated to making Pelham athletics the best they can be, a task she considers a privilege to do.

“When I wake up every single morning, I truly love coming to work,” Kiel, a Helena resident said. “I truly bleed green and gold and love Pelham athletics so much. I don’t have a hobby, Pelham is my hobby.”

In 2014, Kiel was named the director of athletics for Pelham City Schools, and she also serves as athletic director for Pelham High School.

In 2017, Kiel became the President of the Alabama High School Athletic Directors and Coaches Association.

During her time as president, Kiel leads officers of the AHSADCA and more than 13,000 members statewide in many activities and projects that help benefit athletes, coaches and athletic programs.

“This is a role that I have been blessed to serve in,” Kiel said. “I believe it has helped and will continue to help make Pelham athletics better, because it allows me to network with people across the state.  It will allow me to take Pelham to a whole new level.”

Kiel said outside of her parents, who she describes as “wonderful,” it was being involved in athletics early on that taught her life-long skills that she now uses in her day-to-day career.

“After graduating from college, I hoped I would have an opportunity to teach and model those skills to young people to hopefully impact their life in a positive way,” Kiel said.

“There was a time where I did not think I would ever become a teacher or a coach,” Kiel said. “I honestly always dreamed of becoming an FBI agent, which was something I thought I really wanted to do. It wasn’t until I had experience in college athletics that I decided I wanted to stay around athletics, and that was where I wanted to be able to find a way to give back and serve student athletes.”

While Kiel is quick to shine the spotlight off of herself to the coaches and staff, and student athletes within Pelham athletics, it is her day-to-day dedication to her job that helps the program succeed.

“Kim works closely with each coach to help to motivate and improve us positively,” said Pelham Middle School coach Polly Jones. “She communicates the importance of strong programs from youth to high school. She also makes sure that coaches have the guidance and means to run our programs at the highest levels. Kim has worked with our rec. Leagues to get time in the gyms for our Pelham youth, which also helps our middle school teams. It is important to know that she cares as much as we coaches do. She proves this by being present and involved at games, practices and meetings, and she is always our ‘biggest fan.’”

“I was an AD for 15 years before coming to Pelham so I know the responsibility of the position,” Causey said. “Kiel does a fantastic job of taking care of those responsibilities and making our jobs much easier on a daily basis, as well as our long-term jobs.”

While Kiel does not take credit for organizing athletes to participate in honoring fallen soldiers buried at the Alabama National Cemetery in Montevallo with Wreaths Across America, Kiel said she considers it an honor to be involved.

“It is such a great way to serve our community,” Kiel said. “We have done this now for three years, and I have been so proud of our student athletes. It makes my heart smile that we are teaching our kids to serve.”

Although no two days are ever the same for Kiel, and her daily activities encompass a multitude of projects, she is fiercely committed to helping coaches and student athletes be successful.

“I learn from the coaches and students each and everyday,” Kiel said. “I am a lifelong learner, and my passion is to serve.”

By NEAL WAGNER / Managing Editor ALABASTER – A large neighborhood annexed into Alabaster after its residents voted to... read more