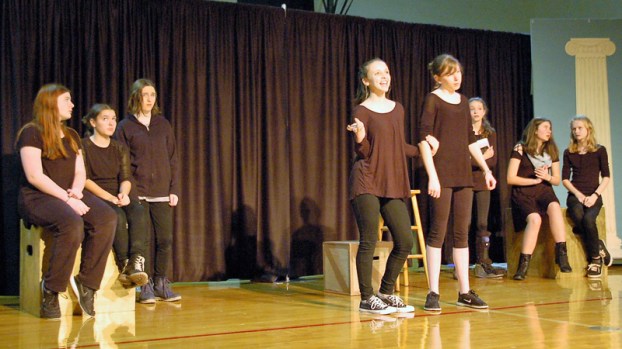 HOOVER – The Alabama State Thespian Festival is the culmination of the work of Berry Middle School’s Junior Thespian Troupe 88177, but the students involved wanted a showcase to present their pieces for family and friends in a more relaxed environment.

Three years ago, as the Troupe was preparing competition pieces for the Festival for the first time, the pre-competition showcase was born, theatre arts teacher Dianne Rowe said.

But they needed a name.

During a brainstorming session among eighth grade students, “Super Awesome Dramatical Hour of Fun” seemed to sum things up nicely.

“And then another student said, ‘And cake! There has to be cake!,’” Rowe said.

There is actual cake at the event, which this year was held on Feb. 20, but it has also grown to include a cake-inspired art show presented by the Berry Art Department.

The first year of the Dramatical Hour of Fun, performances were held in Rowe’s classroom. The Art Department got involved the next year.

“This year, we had nine students taking monologues, one group acting scene and a one-act play that has students in it,” Rowe said.

The pieces were presented in the school gym.

Students began working on the pieces before Thanksgiving.

“They’ve put in a lot of time on these,” Rowe said.

Berry Principal Chris Robbins was recognized at the festival by the Alabama Chapter of the Educational Theatre Association as Administrator of the Year.

Robbins has provided support for Rowe’s efforts in growing the Troupe from its beginnings with nine students four years ago.

No admission is charged for the Dramatical Hour of Fun, but donations were encouraged from the 60-70 people in attendance, with proceeds this year going toward a planned upgrade of the school’s sound system.

The program’s success can be attributed to the support of parents and others in the community, Rowe said.

“I’m super proud of these kids,” she said. “They’re putting in a ton of time and effort, and it’s always great to see them perform in front of family and friends.”

The troupe’s one-act play, “How I Got That Part,” won Best in Show for the Junior Chapter Select Category at the festival.

VINCENT – The first integrated class at Vincent High School 50 years ago was recognized at a Black History Month... read more