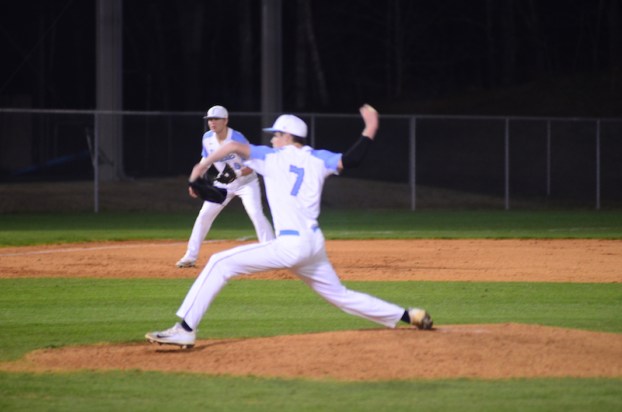 Helena’s Richard Fitts (7) struck out 10 batters and allowed just one hit in six innings to record the win against Thompson on Feb. 27. (Reporter Photo/Graham Brooks)

Fitts, an Auburn University baseball signee, had his best outing so far this season going six innings strong while allowing just one hit. He struck out 10 Thompson batters on 86 pitches and issued no walks.

Helena got on the scoreboard first in the bottom of the second inning after John Stephen Heacock hit a leadoff double and would come around to score a few batters later. Heacock advanced to third on a Thompson error and then scored when Sam Pearce’s pickoff attempt sailed passed the first baseman to make it 1-0 Helena.

Heacock would deliver again for Helena in the bottom of the fifth inning as he drove in a run on an RBI-single to make it 2-0 Huskies. Two batters later, Heacock would score from third on an infield single.

Leading 3-0 heading to the final inning, Josh Daugherty came in to replace Fitts on the mound and worked out of a jam to record the save. Daugherty issued back-to-back walks to start the inning but settled in to record a lineout, a strikeout and a fly out to end the game to preserve the shutout.

Heacock led Helena at the plate going 2-for-3 with two doubles, two runs scored and an RBI. Trevor Bell also went 2-for-3 at the plate for the Huskies.

Thompson’s JC Parker recorded he Warriors lone hit in the game on a single in the fourth inning and Pearce would take the loss on the mound. Pearce allowed six hits in five innings with five strikeouts and five walks.

With the win, Helena improved to 3-2 on the season and Thompson fell to 1-4.