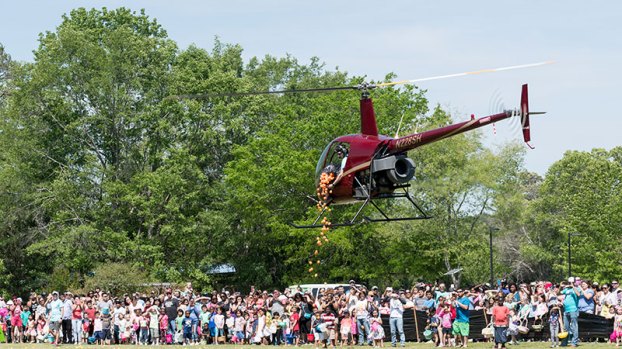 A helicopter drops thousands of candy-filled Easter eggs onto a field at Alabaster's Veterans Park during Cultivate Church's 2017 helicopter egg drop. This year's event will be held on Saturday, March 31. (Reporter Photo/Neal Wagner)

ALABASTER – Cultivate Church, which operates campuses in Alabaster and Columbiana, will again give area children a chance to take part in a unique tradition in late March, as it will again hold its helicopter egg drop.

The event will be held at Alabaster’s Veterans Park off Alabama 119 on Saturday, March 31, and will include three separate events for children of different ages.

This year will mark the fifth time the church has held the helicopter egg drop, after holding drops in 2012 and 2013 and bringing it back after a two-year hiatus in 2016.

The day will begin with an egg hunt for ages 0-3 during which the hunt area will be scattered with plastic, candy-filled eggs, for younger children to collect.

Following the egg hunt, the church will hold one helicopter egg drop for ages 4-6 and another for ages 7-12.

During the drops, kids will line the perimeter of the park’s field, while the helicopter drops thousands of eggs from above. After the helicopter leaves the field, church officials will give the signal to the kids, who will then rush to collect as many eggs as possible.

The free event will also feature food, inflatables, the Easter bunny and more.

To skip the line and pre-register for the event, visit http://cultivatechurch.tv/eggdrop.

PELHAM – Next school year, returning Pelham High School students will have to adjust to a new way of doing... read more