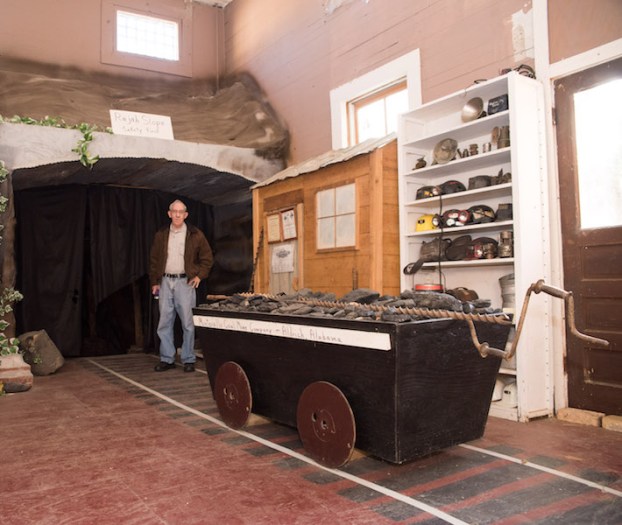 Aldrich Coal Mine Museum curator Henry Emfinger stands at the entrance of the simulated coal mine slope inside the Montevallo Coal Mine Company Store building. (Reporter Photo/Keith McCoy)

MONTEVALLO – Time seems to stand still inside the old Montevallo Coal Mine Company Store building in Montevallo. Metal mining tools and framed black-and-white photographs line the walls. Collectible cars fill a display case on the main level. An antique cash register sits on the corner of a counter. The original post office boxes families used when Aldrich was a thriving mining community fill a side room on the main level. Each part of this faded white building, right down to the creaky wood floors and the wavy window panes, speaks of a bygone era in this small nook of Shelby County.

Henry Emfinger, 82, knows the old building well. It’s what he pictures when he remembers moving to Aldrich with his family in 1942 so his father could work in the coal mine. Emfinger was just 7 years old.

“It was part of my childhood,” Emfinger said, before reciting the line “I owe my soul to the company store” from Tennessee Ernie Ford’s “Sixteen Tons,” a song about coal miners. “It was one of my first memories of moving here.”

A relic from the early 1900s, the Montevallo Coal Mine Company Store building now constitutes part of the Aldrich Coal Mine Museum, where Emfinger oversees the collection and preservation of items that detail the history of the Aldrich coal mine and camp, other mining camps and the city of Montevallo. For Emfinger, saving Aldrich’s history for future generations is as natural to him as taking a breath; it’s a lasting way to honor the families, including his, that knew what life in a mining camp was all about.

Emfinger’s father, Henry Thomas Emfinger, was a 30-year coal miner and former Representative. He worked for a coal company in Bibb County before moving the family to Aldrich in 1942.

Son Henry spent the remainder of his childhood in Aldrich, playing with friends and occasionally taking photos around the camp with his Brownie Hawkeye camera, a gift from Santa Claus when he was in grammar school.

The camp was a tight-knit community. “Everybody that lived here worked in the mine,” Henry said. “The company owned the houses.”

Henry and Rose, his wife of 60 years, met at Aldrich First Baptist Church, the church their families attended when they were children, and the church the couple still attends today. They live in one of the original Aldrich mine camp houses.

Henry graduated from Montevallo High School in 1954, started at the University of Montevallo (then called Alabama College), joined the U.S. Air Force for about 20 years and returned to Montevallo to finish his college education.

Neither Henry nor his brother ever worked in the coal mining industry.

“I was chicken,” Henry said.

But that hasn’t lessened his passion for preserving some of the buildings and history of the mine camp that shaped his childhood.

The Aldrich coal mine camp was named after William Farrington Aldrich, a coal mine owner. He moved his family south to build the town of Aldrich, Henry said.

Aldrich and his wife, Josephine, lived in a large Victorian home they built on the property. “Rajah Lodge,” as they called it, was famous in the South, sometimes compared to Biltmore Estate in North Carolina.

Other buildings in the camp included the company store, Aldrich Post Office and Farrington Hall, the building named after the couple’s late son, Farrington, that served as a private office, library and recreation hall for the family. Aldrich Prison was open from 1913-1928, and convicts worked in the mine.

Text on the Alabama Historical Commission’s sign outside the Aldrich Coal Mine Museum summarizes the area’s history: “Coal was being mined in Shelby and the surrounding counties of Tuscaloosa, Jefferson, Bibb, Walker, and St. Clair as early as the 1830s. By 1859, the largest mine operation in the state was the Alabama Coal Mining Company, consisting of several drift mines in the Montevallo area. Changing owners, names, and locations several times, it was in continuous operation for over a century when the Montevallo Coal Mine Company in Aldrich closed July 5, 1942. Two historic buildings remain: the Montevallo Coal Mine Company Store (1928) and Farrington Hall (1908), the office building from 1925-1942. These buildings make up the Aldrich Coal Mine Museum established as a tribute to the coal mining industry and coal miners in Alabama. Both Montevallo Coal Mine Company Store and Farrington Hall are listed in the Alabama Register of Landmarks and Heritage.”

Henry bought the company store and Farrington Hall in an effort to preserve the town’s heritage and honor his father’s work as a coal miner. Located off County Road 203 in Montevallo, the historic buildings comprise the Aldrich Coal Mine Museum.

Over the years, people have donated items to Henry for use in the museum, sometimes by simply leaving things on the store’s porch. The display cases on the main level are original to the store, and after going to different places when the store closed in 1942, made it back to Aldrich.

“I’m very thankful for that,” Henry said. “I have had a lot of help from the community.”

In addition to the many photographs and memorabilia on display in the company store, a simulated coal mine slope allows visitors a glimpse into what it was like to walk into a mine shaft.

Across the lawn, Farrington Hall contains pictures, artifacts and five murals painted on the walls by Italian artist Giuseppe Moretti, whose works include Birmingham’s Vulcan statue. Farrington Hall was placed on the National and Alabama Register of Landmarks and Heritage in January 2008.

In 1997, a monument honoring all coal miners was installed near Farrington Hall.

“We are incredibly blessed to have the Aldrich Coal Mine in Montevallo,” Montevallo Mayor Hollie Cost said. “Henry Emfinger is a tremendous historical asset to the city. He has welcomed school groups and others to his museum for years, willingly sharing stories of the coal mining days in our history.”

Henry said he has experienced much joy delving into Aldrich’s history and putting it on display for younger generations, including his three children, eight grandchildren and five great-grandchildren. As his parents’ only child of four still living, Henry takes his work as the museum’s curator and chief historian seriously. He hopes to bequeath the museum to one of his children someday.

“A lot of stuff in here is family memories,” Henry said. “I’m so thankful we moved here when I was a child, to remember how it was. I wouldn’t change it for the world.”