Alabama Power is facing $1.25 million in fines from the Alabama Department of Environmental Management at five of its plant sites throughout the state, including the E.C. Gaston plant in Wilsonville. According to ADEM, the coal ash ponds at the plants are violating Alabama’s clean water laws by contaminating groundwater. 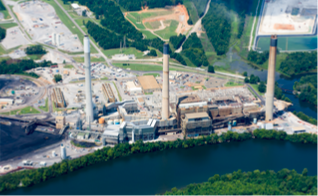 Coal ash is the waste that’s left over after coal is burned to produce electricity. It contains toxic heavy metals such as mercury, lead, arsenic and many others. The Wilsonville coal ash pond was established in the 1960s prior to federal regulations requiring coal ash ponds to be lined.  The unlined coal ash pond at the Wilsonville plant sits below the groundwater line and covers about 270 acres.

ADEM cited groundwater testing data that showed the presence of toxins such as arsenic and lead. ADEM proposed fines for a total of six coal-fired power plants for $250,000 each on Friday, March 2, for ground water contamination. Five of the six plants belong to Alabama Power. The sixth plant belongs to PowerSouth Energy Cooperative.

Amoi Geter, director of public relations for Alabama Power, said the company is aware of the proposed orders from ADEM, and are still reviewing them. She said the orders issued by ADEM were based on monitoring results Alabama Power submitted to ADEM in compliance with the federal regulations.

“As it relates to the fines, Alabama Power has taken responsible, reasonable actions at every step of the way and do not believe the amount of the penalty is warranted,” Geter said. “Alabama Power recently completed analyzing multiple groundwater samples taken from more than 150 locations at five of our plants. Based on evaluations to date, none of the results detected pose a risk to neighbors, nearby waterways or water sources.”

However, Geter said if the orders go through, Alabama Power will comply and the fines and penalties will not be paid by customers. Alabama Power and PowerSouth would be required to submit quarterly reports, and plans for a comprehensive groundwater investigation, corrective measures and facility investigation.

“We knew this was coming,” said Wilsonville Mayor Lee McCarty. “We knew the groundwater was going to be contaminated and frankly Alabama Power did, too.”

McCarty said he feels as though Alabama Power representatives lied when they said during a Wilsonville City Council meeting that there was no groundwater contamination occurring at the Wilsonville plant.

“I find this outrageous,” he said. “The groundwater is contaminated. Lead is toxic even in the smallest concentration.”

He said he is also outraged by the $250,000 fine issued by ADEM for the Wilsonville plant.

He said it seems as if the state and Alabama Power are content to leave the 23 million tons of coal ash sitting in unlined ponds in Wilsonville, regardless of what it does to people.

“I will be protesting in any manner that I can,” he said. “I’m not happy about this at all. It’s just shameful. I will not be satisfied until the coal ash pond is removed. It is a catastrophe in process that needs drastic remedy.”

Alabama Power is already in the process of dewatering, closing and consolidating materials at ash facilities at its electric plants. Geter said the closure process is being conducted in compliance with all regulations. Alabama Power expects all facilities to stop receiving ash within a year. Alabama Power also will move material away from the river and ultimately reduce a facility’s footprint by as much as half.

Geter said Alabama Power is installing state-of-the-art dry ash handling and wastewater treatment facilities designed to meet or do better than all environmental standards and replace the function of ash facilities. The company worked with professionally licensed, third-party engineers to evaluate and identify the safest and most effective closure plans. Closures are site specific and involve complex processes that balance multiple factors such as plant location, size and amount of material.

The cited facilities include: