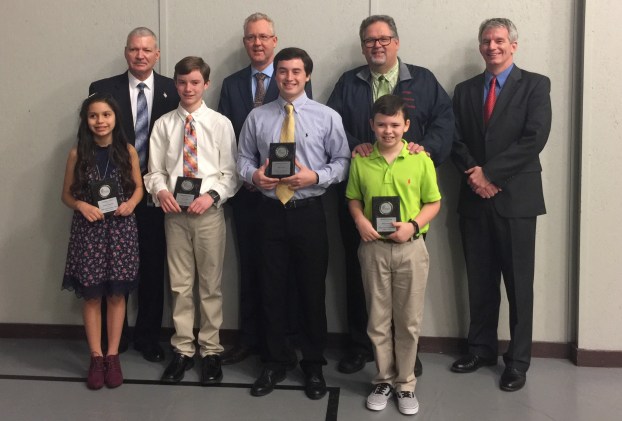 PELHAM – Four Pelham City School students were recognized for their strength of character at the Character in Action awards ceremony on Wednesday, Feb. 28, at Family Connection in Alabaster.

The program was created in partnership with the Shelby County Juvenile Court, Shelby County District Attorney’s Office and the three school systems within Shelby County. Each month a different school system is invited to select one student from each of their schools to receive a Character in Action award.

“I generally see kids who make bad decisions, not those who are doing the right thing,” Kramer said. “This program was created just to let us know that there are kids who are out there making good decisions. We realize that parents are a major part of that because it all starts at home.”

Teachers nominated students from each Pelham school to receive the award.

“Nominations are not based on grades, athletic ability or popularity,” Kramer said. “It’s based solely on strength of character.”

The following students were recognized:

Germek is involved in many leadership roles at PHS, according to his nomination form.

“From the Student Government Association and Peer Helpers to the Principal’s Student Advisory Committee and the Business Finance Advisory Board, Jake demonstrates leadership and integrity throughout his daily interactions with others,” the form reads.

Germek was praised for being a calm person who demonstrates respect toward himself and others and for always being level-headed, fair, willing to help and having “impeccable manners.”

In addition to extracurricular clubs and organizations, Germek has a rigorous course load. He is on track to receive the Advanced Diploma and takes many AP courses.

“Jake is a genuine person who goes above and beyond to exhibit a spirit of friendliness, integrity, dedication and school pride each and every day,” his nomination states.

-Shawn Winn – Pelham Park Middle School, eighth grade
Winn is credited for being a “true leader who always pushes to be the best version of himself.”

He serves as a PPMS Ambssador, a peer helper and his teachers describe him as very studious and always pushing himself to the next level.

“He takes initiative for his work and learning, and goes above and beyond expectations in the classroom,” his nomination form reads.

His teachers report that he was daunted at the prospect of taking pre-AP classes, but he has handled these classes with “maturity and incredible effort, and is always asking how he can improve his work.”

His sense of responsibility and citizenship shined through when he organized a service project to write and send letter to military service members for Christmas. Teachers complimented Winn, who is also a Boy Scout, on how effectively he planned the project and completed the necessary steps to make it a success.

-Ethan McInnis – Pelham Oaks, fifth grade
McInnis is said to have a quiet approach to leadership and dependability. He serves on the school’s Student Lighthouse Team, is a Library Helper and is a friend to all, according to his nomination form.

“Ethan is known throughout the school for taking time to speak to people he meets in the hallway. He consistently looks for ways to help people. For example, when Ethan sees some who needs a friend he makes a point to include them in his circle of friends,” reads his nomination.

Teachers said McInnis can be counted on to remember and complete his assigned responsibilities and he gives it his best effort. He asks questions to further his understanding of lessons and gets advice from his teachers about how to improve his work.

“Ethan seems to understand how what he learns this year connects to next year,” his teacher said. “He has a positive attitude and encourages his classmates. He does the right thing even when no one is looking. He is a true example of a leader and a person who exhibits outstanding character.”

-Victoria Gonzalez – Pelham Ridge, fifth grade
Gonzalez is a role model in her school. She is credited for being the kind of person who does the right thing just because it’s the right thing.

“She doesn’t see to do things for others in order to achieve any sort of recognition,” reads her nomination form. “She embodies the Golden Rule.”

Her teachers said she is friendly to everyone and is the first to volunteer to be a buddy to a new student or help someone who is in need. She seeks out students who seem lonely or excluded and befriends them or gives them the support they may need.

If others in a game don’t seem to be following the rule, she may kindly say, “Okay, let’s go over the rules again.” Teachers said she is kind, but also assertive in her dealings with her peers.

When faced with an academic challenge, she creates a plan of action and sticks with it until she sees it through.

“Victoria creates her own study guides and math practice problems to help her achieve her goals,” her nomination states. “Victoria will often use the time during afternoon dismissal to practice in any academic area she feels she needs to practice. She can often be found with a white-board creating practice math problems to solve in order to increase her understanding. She exemplifies the saying, “Hard work pays off.”

PELHAM – The 2018-19 Course Selection Guide for Pelham High School was approved at a Pelham Board of Education meeting... read more