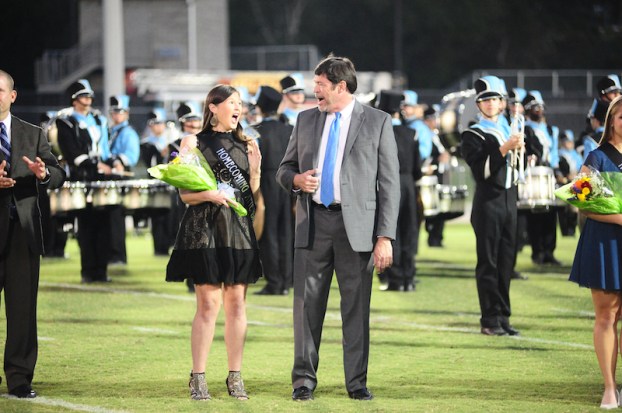 HELENA–An ambassador at Helena High school, officer in the choir, a member of the Tri-Am honor society, A–B honor roll, current Ms. Amazing pageant winner and a member of the chamber choir. Helena High School senior Mary Catherine Collins has accomplished all of these feats and most recently she was crowned the 2017 HHS homecoming queen. She’s a bright student with a bright future but there’s one detail about Collins that makes all of this even more impressive. It’s that she’s done all of these things with autism.

Mary Catherine’s parents, Jeff and Ashley Collins, have obviously been instrumental in molding their daughter into the person she has become today but coming to grips with Mary Catherine’s autism and learning how to best deal with it has been a daily struggle for the couple.

Jeff and Ashley first found out their first daughter had autism at the age of two and a half, and like most parents who find out their child has special needs, they weren’t sure where to turn or what to do.

As the years went on, Jeff said he and Ashley both decided that they would be open and honest about Mary Catherine’s autism and help other parents work through the same issues they’ve faced.

“One thing that I’ve really taken time to do is I like to do a lot of what Mary Catherine does on Facebook because most of our family lives elsewhere,” Jeff said. “I always post stuff so they know and I do this because I know when we found out she had autism she was two and a half and we didn’t know what to do. We didn’t know what was going to happen and we were at a loss. It took us awhile to dig out of it but we became very proactive. We tried everything you can try, but the one thing I always wanted to do is that if there’s a family in the same situation, I tried to make myself available. I’ll periodically post and ask if anyone needs someone to talk to that I’m available.”

The Collins family lived in Montgomery and as Mary Catherine got older, Jeff and Ashley enrolled her in a private school that specialized in special needs students.

“We were from Montgomery and she went to a private school there that specialized in high functioning autism and ADHD kids,” Jeff said. “It was set up in a small classroom environment and all of the teachers had some sort of special education background so it was a real guarded situation. There was no chance of bullying or any chance of a lot of different things.”

It was in Montgomery though where one incident away from school made Jeff and Ashley rethink things.

“Some kids were picking on her because she doesn’t speak well,” Jeff said. “That’s really her only deficit and that’s when she realized that there was something different about her because she was surrounded by kids like her and then all of a sudden she wasn’t. We’ve always been open about her having autism but that’s when she realized that something was not right. She said to us ‘I just want to be right’ which broke our hearts but upon further discussion, it also made us realize that we may be sheltering her a little too much. The real world is not going to conform like that school did and maybe we should challenge her.”

The move to Helena

After speaking to a family member that worked in the Shelby County School System and long discussions about what to do, the Collins family took a chance and decided to embark on a new journey.

“A family member in the Shelby County School System at the time kept telling us that we need to look into Shelby County because they were really taking a proactive approach to autism,” Jeff said. “Three years later, we decided to do it and at that point she was in middle school.”

The family member recommended the Collins look at Helena because of how well the middle school was testing and the arrival of a new high school would be set to open Mary Catherine’s freshman year.

After taking the advice, the Collins made the trip from Montgomery to Helena to check out the middle school facility.

“We brought her up here and we took a tour of the school on a Friday and she loved it,” Jeff said. “There were two things that won her over: The choir room and the lunch room. At her old school, they ate lunch in the classroom every day and they didn’t have a lunchroom so she just liked the idea of going to the lunchroom. So, starting seventh grade, we rented our house out of Montgomery and we moved here and took the biggest chance of our life.”

Even though they heard great things about Helena and the Shelby County School System, Jeff said faculty members at Mary Catherine’s old school weren’t confident she could succeed in a public school environment.

“I asked a couple of teachers at her other school if they thought she would be able to succeed in a public school and I asked them to be honest with me and they both said ‘no,’” Jeff said. “I wasn’t sure she would either to be honest with you. We came up here though and it’s been unbelievable. It’s been absolutely unbelievable. I have nothing but positive things to say about the Shelby County School System. She has flourished here.”

Now a senior at Helena High School and set to graduate in Spring 2018, Mary Catherine has done more than prove her doubters wrong. She has defied the odds and despite her autism, has accomplished more than the average high school student.

“I take classes and I have all A’s and B’s,” Mary Catherine said. “I like going to school and I like to study and do homework. I go to lunch and I like to sing. I go to ambassador meetings every Wednesday and I go to acapella choir room every Thursday. My favorite teacher is Mrs. Knight my anatomy teacher.”

Jeff and Ashley both acknowledged that Mary Catherine has always had trouble speaking, but ironically, Mary Catherine uses her voice to do one of her favorite things.

“Mary Catherine didn’t start talking until she was 7-years-old,” Jeff said. “In a lot of ways, Mary Catherine and her sister Anna Grace learned to talk together because they’re nine years apart.”

Despite trouble speaking, Mary Catherine loves to sing and has performed several times in front of large crowds and on big stages.

“Mary Catherine has sang at several benefits and fundraisers,” Jeff said. “She sang at the Grand Bohemian Mountain Brook for an event and she has sang the national anthem at several Helena sporting events.”

Mary Catherine is active in the school choir and after graduation, she plans to join the choir in whichever college she ends up attending.

A queen is crowned

Sept. 29, 2017 is a day Mary Catherine, and the entire Collins family will remember for as long as they live.

This was the night of Helena High School’s homecoming where a new king and queen would be crowned.

In the weeks leading up to homecoming, Jeff and Ashley said Mary Catherine nonchalantly mentioned that several classmates had her support to run for homecoming queen.

“She got in the car a few weeks before homecoming and she named about 30 names and she told my wife that these people all voted for me for homecoming queen,” Jeff said. “It wasn’t even on our radar. Ashley immediately text somebody at the school and they said ‘yeah, she has a big support system here and she was nominated.’ We found out the next day she made the homecoming court which consisted of five seniors.”

Jeff and Ashley said they were both thrilled at the fact that Mary Catherine had the honor of just being on the homecoming court, but the night of Sept. 29, they were in for a big shock.

“I was completely overwhelmed,” Ashley said. “I ended up going to the homecoming dance and everything to take pictures and those kids just blew me away. There was a couple of them that came up and they were so happy for Mary Catherine and they said, ‘we wanted Mary Catherine to have a high school memory that would be with her forever and that’s why we wanted to do that.’ Of course, I cried all weekend.”

After Jeff escorted Mary Catherine across midfield at Husky Stadium, they took their place on the field before the announcement was read.

Moments later, Mary Catherine’s name was read as the 2017 HHS homecoming queen and that’s when the numbness set in, according to Jeff.

“That was as real as it gets,” Jeff said. “She squealed and I was kind of numb about it for about 12 hours. From what I understand, just about everybody that was on the homecoming court voted for her and so it was kind of overwhelming. The student body really took to her and you heard the ovation when they named her when we went through the student section getting pictures. We had no idea and it was a nice surprise.”

Mary Catherine also had no idea she was going to get the crown and she described her feelings on the field after the announcement.

“I was thrilled and excited. I screamed and I was really excited,” Mary Catherine said.

Positive influences along the way and life after high school

Throughout her high school experience, Mary Catherine has had several friends that have served as mentors along the way.

One of those mentors is fellow senior and HHS varsity football player Kopeland Rosser. Rosser has known Mary Catherine since she moved to Helena in middle school.

“Kopeland met Mary Catherine in eighth grade and he has been her guardian angel,” Jeff said. “He watches out over her and his girlfriend is a cheerleader and they eat lunch with her every day. His girlfriend went with my wife to help Mary Catherine shop for homecoming dresses and she said ‘based on how people are voting I think she’s going to win.’”

Mary Catherine said she sees Kopeland and his girlfriend as two of her best friends.

“He loves to play football and I eat lunch with him and his girlfriend,” Mary Catherine said. “They’re my best friends.”

Another friend that has helped Mary Catherine excel in high school is her friend EJ.

“EJ has autism and they go to dances together and they meet each other,” Ashley said. “I think if they didn’t meet each other in ninth grade they probably never would’ve done anything like that. They really are good for each other.”

Set to graduate in May 2018, Mary Catherine has big plans for her future.

Each college has special autism programs that will help Mary Catherine exceed and Jeff and Ashley will work with their daughter to choose a college that best suit her needs.

No matter where she goes, Mary Catherine said she will be participating in the choir.

“When I plan to pick a college, I’m going to be in the choir,” Mary Catherine said.

For now, Mary Catherine will continue to lean on the relationships she’s built at Helena High School and relish in the fact she is the homecoming queen.

After all, she’s overcome the odds and earned it.

Registration open now for OHOH Run For Their Lives

By GRAHAM BROOKS / Staff Writer HELENA–Serious runners, causal runners and anyone in between will have a chance to participate... read more