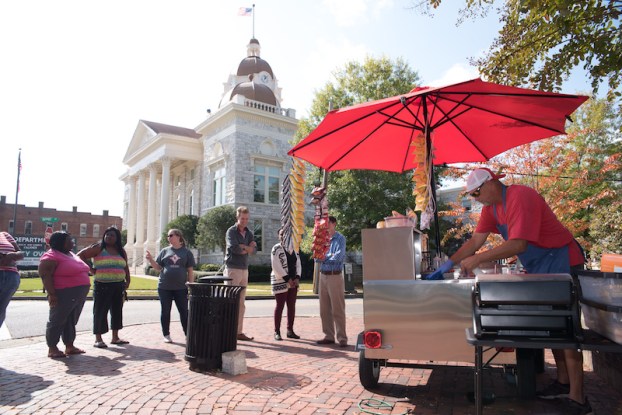 Rules are a part of everyday life. Almost every situation or occasion comes with a set of written or unwritten guidelines.

Calera resident Mark Lollar has spent his life compiling a list of twelve rules. As the sole owner and operator of the Great American Hot Dog Stand, Mark can be found making serving hot dogs and socializing with locals in Calera and Columbiana on weekdays. Mark said his list of rules serves as a guideline for how he handles his business, family matters and life in general.

Mark is not native to Shelby County. He originally grew up in Walker and Blount Counties before enlisting in the military immediately after graduating from high school in the 1980s.

“I graduated from high school and the next day, my dad dropped me off at the hotel and then the day after that, I got on a bus,” Mark said.

As a young man living in Birmingham in the 1990s, Mark said he lost his way for a while. He referred to his permanent address at the time as his tag number, meaning that he was living out of his car at one point.

“Well, I didn’t really have a drinking problem. I had a problem with drinking. I drank fine, and I drank a lot of it all the time. The problem was what happened and the bad decisions that ensued from drinking a lot,” Mark said.

Mark attributed much of his alcohol problems to his leaving the military and having to return to civilian life.

The ‘why’ is fairly complex. I look back now, and I think most of it was stupidity. I think I had some trouble adjusting to regular life,” Mark said. “I think that I just didn’t know who I was and probably didn’t understand how to deal with reality very well.”

It wasn’t until he met his wife that Mark said he finally began to realize that the rules applied to him. Through “the love of a good woman,” Mark said he was finally able to make it to where he is today.

After he and his wife married in 1995, Mark took a job at a company in Chilton County and moved to Jemison. After Mark’s second child was born, the family relocated to Calera in September 2001.

“We needed a house that was a little bit bigger, and at that time, there were a bunch of slab houses that were for sale,” Mark said. “Against all odds, (my wife and I) are still together.”

Cooking up a name for himself

Mark wasn’t always known as the “hot dog guy” in Shelby County. In fact, Mark said he was just a regular guy until he made his second attempt at opening a hot dog stand about a year ago.

Mark first tried to open a hot dog stand about seven years ago after losing his job.

“I was out of work. I had a really good job being a consultant, and then the company started going under and I got fired. I needed a job, and I was like, ‘I don’t know what I’m going to do,’” Mark said. “I was surfing the Internet and I came across this guy who was talking about building your own hot dog cart and making a boat load of money. I liked hot dogs, and I cooked hot dogs all the time at home, so I thought, ‘Why don’t I cook hot dogs and sell them to people?’”

Unfortunately, Mark said he had to give up at his first attempt after facing challenge after challenge from the local health department.

“Ultimately, I spent about a thousand dollars and just couldn’t get licensed. It was just one hoop to jump through one hoop after another, so I went and got a real job,” Mark said.

In spring of 2016, Mark decided to give the hot dog business another go after he was going through a job change.

“I wondered if the health department had gotten any better, and they had. They were no longer hostile to mobile food,” Mark said. “I told my wife we were getting back into business, and she thought I was nuts – And it does sound nuts that you’re going to make a living selling hot dogs.”

This time, Mark said he was determined to start and run the hot dog stand, regardless of any logistical issues that stood in his way.

“I said, ‘To heck with it, we’re going to make it work, regardless,’” Mark said. “Even if they were hostile, this time, I wasn’t going to give up. I had done enough due diligence and enough studying that I knew that we could be successful.”

While he has spent his life learning about why they’re necessary, Mark said he didn’t start keeping an actual list of rules until recently. He came up with some of the rules by himself. Others, he said, he stole from outside sources, like the movie, “Zombieland.” There are a total of twelve rules, which are numbered between one and 32. Several of the numbers are left blank to enable future growth, Mark said.

“The rules apply to every aspect of life, whether you’re in business or whether you’re doing something else,” Mark said. “That’s the beauty of the rules, they’re designed to work in all situations that you find yourself in.”

The rules are as follows:

–Rule number one: “God’s always God, talk to Him.”

“Keeping God number one in my life has seemed to work out better for me than not,” Mark said. “When I didn’t, things were pretty bad. I had no rules, and I really didn’t have any morals. I was just a wild freakin’ animal.”

“Are you lucky enough to have a grandfather? Then you’d understand what I’m talking about,” Mark said. “Everyone who’s got a Pawpaw or seen someone else’s Pawpaw understands not to mess with Pawpaw.”

“Apathy and inaction is not an excuse,” Mark said. “Don’t say, ‘Well, I don’t know how,’ Open up YouTube. There’s a YouTube video on literally how to do anything. Just think about it.”

–Rule number four: “Act like you’ve been there before.”

“I was a young redneck kid in the military working for a big general. I was a little bit couth, but not much. We went to a fancy restaurant, like $150 a head fancy. There were five bajillion bowls and knives and everything. I had to get with somebody and get the rundown on all that. While we didn’t sit at the table with the bigwigs, we were at the table next door. I didn’t want to look like an idiot, so we just walked in, sat down and acted like this was normal. It just puts you at ease,” Mark said. “The first day I sold hot dogs, I acted like I had been selling hot dogs for five years.”

–Rule number five: “Be smarter than the stuff you’re fooling with.”

“If you’re going to be doing something, you need to figure out how to do it. There might be some benefit in learning as you go, but with some things, there’s a certain way you need to do them,” Mark said.

“I don’t have to refer to six, because six just happens,” Mark said.

“I happen to believe in the New Testament, and Jesus said to love everybody,” Mark said. “One thing I’m not down with is being bipolar about that stuff. He said it. I feel like He meant it, so we need to do it.”

“Sometimes, rule number seven just doesn’t work. I want to try to love everybody and I’m going to go a long way with that. I hope that rule eight does not come to be, but because I’ve also lived a lot of life, rule eight exists. There might come a time when somebody just needs to get whooped a little bit,” Mark said.

“There’s no sense in whining about stuff,” Mark said. “Refer back to rule number three.”

–Rule number 10, Mark said, is to never do anything inappropriate at work.

–Rule 32, which Mark said was stolen from “Zombieland,” is to enjoy the little things in life.

(Not) Following His Dreams

Mark does not describe himself as a dreamer. Other than supporting his family, Mark said he really has no lifelong dreams.

“With somebody that gets out and just chases a dream, it doesn’t ever seem to turn out good. You’ll end up in a weird country covered in llama hair and dying of altitude sickness,” Mark said.

Instead, Mark said his rules have taught him about practicality, resilience and finding a balance between finding his passions and accentuating his own strengths.

“I think you should do what you have a skill for. For instance, if I wanted to build courthouses, there’s a certain skill set I would have to have, but I don’t have that. All of my courthouses would suck. Just because you’re passionate about something doesn’t mean you’ll be any good at it,” Mark said.

Hot dogs aren’t necessarily Mark’s passion, he said, but they give him an avenue to pursue what he really wants to do: providing food and connecting with others.

By GRAHAM BROOKS / Staff Writer HELENA–Books, books and more books was the theme at schools across Helena the week... read more