COLUMBIANA – A Helena man who was arrested and accused of bringing a rolling meth lab into the parking lot of a local business recently received additional drug-related charges while being held at the Shelby County Jail.

Griffin Allen Thompson, 43, who lists an address on River Crest Drive North, was charged with a second count of unlawfully manufacturing a controlled substance and a second count of possession of drug paraphernalia on Thursday, March 1, and charged again with possession of a forged instrument in the second degree on Friday, March 2. His address was originally listed on Lee Street in Sylacauga, but later listed in Helena. 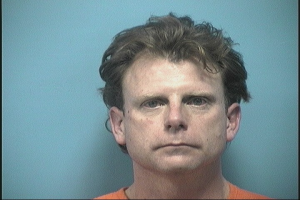 According to Shelby County Drug Enforcement Task Force Cmdr. Clay Hammac, the additional charges came after a search of Thompson’s residence that was conducted after his arrest.

“Our investigators felt that it would be diligent to follow through with the investigation,” Hammac said.

According to Thompson’s arrest warrants, deputies discovered “precursor substances” used with the intent to manufacture methamphetamines and syringes during the search.

The Alabaster Police Department also charged him with second-degree possession of a forged instrument after he allegedly used a Citibank cashier’s check worth over $1,000, “with the knowledge that the instrument was forged,” on Feb. 23.

Thompson was initially arrested by the SCDETF on charges of unlawful manufacturing of a controlled substance and possession of drug paraphernalia on the night of Feb. 23.

Thompson was allegedly discovered with a “shake and bake” meth lab that was dangerously close to exploding in his vehicle, which was located in the parking lot of the Walmart Supercenter on Colonial Promenade Parkway in Alabaster.

Unlawfully manufacturing a controlled substance is a Class A felony. If convicted of this charge, Thompson could face up to life in prison. Second-degree possession of a forged instrument is a Class C felony. Possession of drug paraphernalia is a Class A misdemeanor.

As of Friday, March 2, Thompson remained in jail. His additional charges added $256,000 to his previous bond of $251,000, for a total of $507,000. Thompson’s case was assigned to Shelby County District Court Judge Daniel A. Crowson, Jr. He is set to appear in court for a preliminary hearing on March 22.

By GRAHAM BROOKS / Staff Writer HELENA–Books, books and more books was the theme at schools across Helena the week... read more