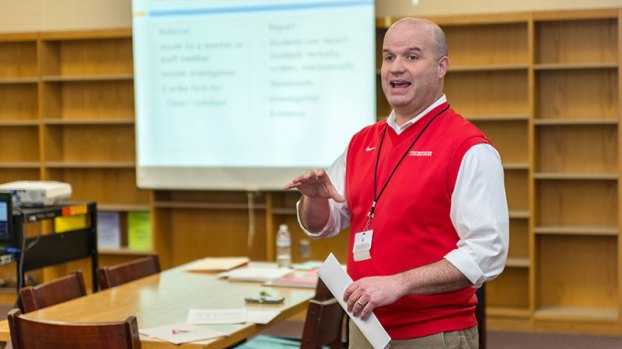 ALABASTER – A tragic topic at Thompson Middle School’s first Warrior Wellness Night on March 1 hit close to home for Alabaster and the rest of Shelby County.

“This community unfortunately knows this topic too well,” said Crisis Center Director Abby Litovsky, who led the night’s session on suicide prevention and self harm, referencing the county’s recent string of suicides involving victims in many age groups. “Sometimes adults don’t think kids are dealing with this and it’s only adults dealing with it. But we’re seeing this affecting kids younger and younger.”

The suicide and self harm prevention class was one of several offered at the inaugural event, which was organized as a result of TMS participating in the University of Alabama Parent Teacher Leadership Academy this year. The event also included sessions of stress and student perfectionism, social media safety, surviving middle school math, bullying and school discipline, a typical day for a middle school counselor, child abuse prevention, anxiety and depression, inappropriate texting and crimes and substance abuse.

Litovsky shared tips for identifying warning signs of suicide, such as feelings of hopelessness and helplessness, actions such as drug or alcohol abuse or recklessness, changes in personality, habits or sleep patterns, threats against themselves or others and situations such as getting into trouble at school or overwhelming life changes.

She said there are three main ways to help when a loved one is exhibiting warning signs of suicide or self harm: Show you care for them, ask directly if they have considered suicide and get help through community suicide prevention resources.

Another popular session at the event touched on bullying and school discipline, and was led by TMS Principal Neely Woodley and Assistnat Principal Kelly Smitherman. The administrators said the school has four levels of violations:

-Class I covers minor infractions such as tardies or dress code violations.

-Class II covers violations such as misuse of technology or defiance to a teacher.

-Class IV infractions can result in criminal charges, and include violations such as drug possession or assaults.

Smitherman said discipline issues are only handled by school administrators, and are done so as confidentially as possible. The administrators receive reports of possible violations through referrals from adults and staff members and from reports from students.

“We take the adults’ word first, because they are trained and they’re professionals, but I’ll never 100 percent take the adults’ word,” Smitherman said, noting TMS administrators always seek to keep consequences for the rule violations consistent for each type of violation. “I’ll always talk to the students to get their side too.”

Woodley said the school takes instances of bullying seriously, and defines bullying as a repeated situation in which one child is “truly a victim.”

PROFILE: After losing both parents, Cedric Tooson keeps their legacy alive through football