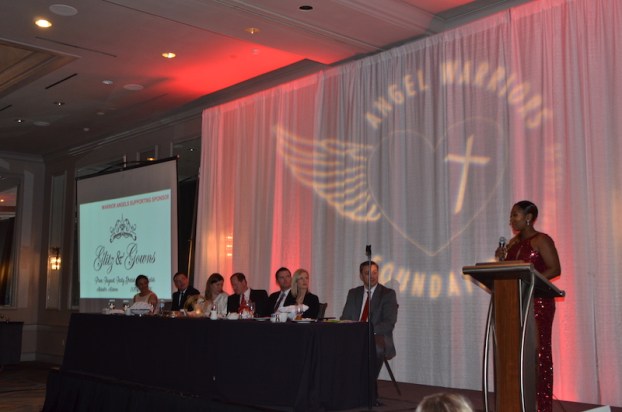 AWF President Jamia Alexander Williams thanks guests for their support of the special needs community and speaks about the importance of programs and events for members of that community at the organization's second annual gala. (Reporter photo/Amalia Kortright)

HOOVER – The Angel Warriors Foundation of Alabaster held its second annual fundraiser gala, A Night for the Angels, at the Hyatt Regency Hotel on the night of Saturday, March 3.

AWF President Jamia Alexander Williams said the gala is the organization’s main fundraiser, and serves as a celebration of the local special needs community.

“The gala is one night to celebrate all of these families and for the community to see the families that we help,” Williams said.

According to Williams, all of the proceeds benefit programs for people with special needs in Alabaster and nearby communities.

“If you could see the smiles on the faces of these children and their parents, it would change your life,” Williams said. “The things that we take for granted are treasures for them. They deserve to have every single thing that our other children have.”

Before AWF was founded, Williams said too many families were forced to seek out resources and activities in other communities.

“I said one day, ‘enough is enough.’ Alabaster is a family. It’s home,” Williams said. “It’s our job to make sure that we provide what they need.”

Vice President Erika Zoebelein remarked on how quickly the organization has grown within the past few years, and commended President Jamia Alexander Williams for her work with the special needs community.

“How are we already at the second annual gala? That’s amazing,” Zoebelein said. “Ever since I’ve known Jamia, she had a vision of Alabaster that was inclusive for everyone.”

The event began with a demonstration from Battleground Martial Arts, which offers the only martial arts classes for people with special needs in Alabama. Comedienne Joy and magician Brian Reaves also performed for guests.

Alabaster residents Brandon Sheila Holifield, who are the parents of a daughter with special needs, gave their testimony on how AWF has changed their lives for the better.

“We attribute our growth to organizations like he Angel Warriors Foundation,” Brandon Holifield said. “We would have had to continue to travel to allow our daughter to do everything she does.”

“You travel to all of these other communities, and you hope so badly for something in your community,” Sheila Holifield said. “When we met Erika and Jamia and (Vice President) Victor (Williams), our prayers had been answered.”

“We couldn’t have been successful last year without the dedicated staff and sponsors. We also wouldn’t be able to do this without you,” she said.

Dustin Chandler, who advocated for Carly’s Law, a state bill that allows the use of Cannabidoil, also known as CBD oil, as treatment for refractory epilepsy, gave his perspective as an activist and a parent of a child with special needs.

Sometimes, Chandler said people will find a “no” before they find a “know” when dealing with a difficult situation.

“My daughter was born in 2011. It was a perfect childbirth. Everything was great. We prayed every night that we’d have a healthy baby girl. At eight weeks old, she had her first seizure. Test after test after test, and we find out that she has a condition called CDKL5 disorder,” Chandler said.

The disorder is caused by a gene mutation and is characterized by developmental issues, loss of language skills and frequent seizures. According to Chandler, his daughter suffered many seizures as the result of CDKL5 disorder, and will likely be dependent on her parents for the rest of her life.

He said he began pushing for the state of Alabama to allow patients to use CBD oil after watching a documentary, and began reaching out to state representatives. He said the first senator he spoke to said “no,” but the bill ultimately passed because of the continuous effort of parents of children with special needs.

“When you give a child a medicine that people have gotten behind, and you make eye contact and finally make a connection, that’s something so godly, but it’s here on Earth,” Chandler said. “I now know why Carly was given to me the way she was. Carly’s purpose was to help people that she will never meet.”

Sen. Cam Ward, R-Alabaster, who is also the parent of a special needs child, spoke about the ways that a community can make a difference by coming together.

“In 2008, we were debating an autism insurance bill. We had so much resistance. We lost, and it was brutal,” Ward said. “In 2017, we were debating the autism insurance bill again. I watched mothers, fathers and grandparents bring their children. A mother stood up. She held her child in her arms and she said this: ‘My son is 3-years-old. He may never get the chance to tell me he loves me.”

“We see teachers, volunteers like Jamia, legislators and parents come together for a purpose,” Ward continued.

The event also featured a silent auction. Zoebelein said the majority of the items for sale were provided by local businesses.

AWF hosts multiple activities and events for those with special needs each month. For more information about AWF and its events, visit Angelwarriorsfoundation.org.

PELHAM – The City of Pelham and the Pelham Fire Department will join forces on Sunday, March 11, with the... read more