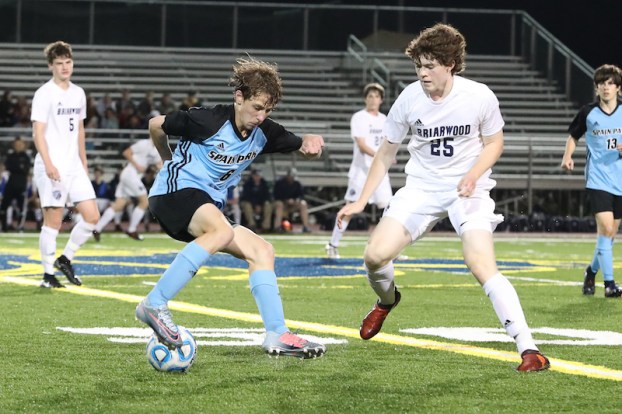 Both Spain Park and Briarwood have their boys soccer teams ranked inside the Class 7A and 5A top 10, respectively. (For the Reporter/Dawn Harrison)

We are now three weeks into the 2018 soccer season and slowly starting to get a feel for what teams have as area play starts gets underway.

With several boys teams looking to defend state championships, the county definitely has high expectations and plenty of talent leading to six teams being ranked inside the top 10 of their respective classification in the latest eurosportscoreboard.com coaches poll.

The highest of those six ranked teams was Indian Springs, who was the county’s only No. 1 team in the most recent rankings released on Sunday, March 4.

Springs, who sits in the 1A-3A classification, is one of three boys’ teams in the county looking to defend a state championship from 2017 and they are off to a nice 5-1-1 start to the 2018 season.

Two of those five wins came by a combined total of 22-0 against area foe Autaugaville to give Indian Springs its first two area wins of the season.

The Oak Mountain Eagles got off to a slow start offensively in 2018 as they are looking to pick up their fourth consecutive state championship at the end of this season.

After scoring just three goals through four games, which led to a 1-1-3 record, the Eagles have finally started finding themselves offensively. In their last four games, they have scored a combined 25 goals and given up just three to their opponents.

It has led to a 3-0-1 record in that time span with two area wins over Huffman and a 4-2 road win over Indian Springs. That strong play has the Eagles ranked No. 2 in the latest standings as they sit just behind 9-0 Enterprise.

Just four spots down from Oak Mountain are the Spain Park Jaguars at No. 6 in the 7A standings.

The Jags got off to an 0-3 start, but rebounded with four consecutive wins to take the 2018 Island Cup in Gulf Shores. Their extremely difficult schedule so far has featured four ranked teams in eight matchups.

Most recently, Spain Park fell to the Briarwood Lions by a final of 3-2.

The Lions are the only 4A-5A team from the county ranked as they came in at No. 2 just behind Randolph High School.

Briarwood is on an impressive roll after reeling off four consecutive wins by a combined 27-2, including two area wins to improve its overall record to 6-2-1 and its area record to 2-0.

In Class 6A, the Pelham Panthers are also looking to defend their state championship from 2017 and are off to a solid start through seven games.

Defensively, Pelham has yet to give up more than one goal in any game this season, while also pitching four shutouts. Both losses are to ranked teams Prattville and Cullman by scores of 1-0.

Their record currently sits at 4-2-1, which has the Panthers at No. 4 in the Class 6A standings.

With five teams already inside their respective top six, the Westminster at Oak Mountain Knights made it six by finding the No. 3 spot in the 1A-3A rankings.

The Knights are off to a 3-1 start to the season with their lone loss coming to Chelsea by a final score of 3-1.

Their three wins over Hazel Green, Calera and Gardendale have come by a combined 10-1.

By ALEC ETHEREDGE | Sports Editor NORTH SHELBY – One of the most elite soccer tournaments throughout the year was... read more