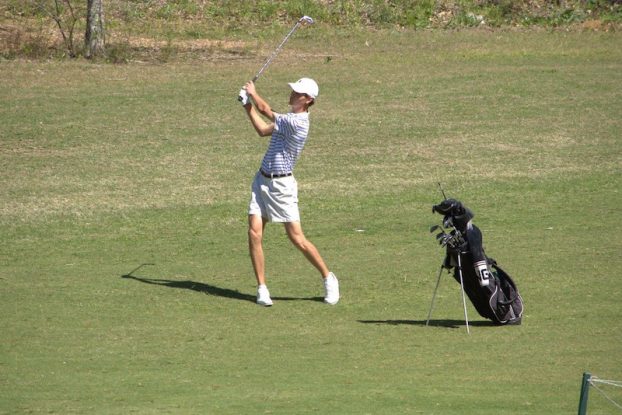 The Alabama Golf Association has named Spain Park senior Ethan Hagood its 2017 Junior boys Player of the Year at a banquet on Saturday, March 3.

It not only marks a prestigious award from the state’s top golfing association, but marks the first ever award to be handed out as he won the inaugural honor.

“It’s an honor to be named the 2017 Alabama boys junior player of the year,” Hagood said in an acceptance speech. “I’m confident that Alabama is one of the most competitive states in the nation for junior golf and it’s no coincidence that we put out so many PGA Tour players.”

Hagood’s 2017 season, in which he was named the player of the year for, was highlighted by winning the Southern Junior Championship held at Willow Point Golf & Country Club.

In that tournament, Hagood birdied his final five holes, including all three playoff holes to bring home the victory.

That successful play in 2017 has already carried over into the spring of 2018. Hagood began the season by leading Spain Park to the Fairhope Invitational team championship at Steelwood Country Club after bringing home the title of low medalist honors.

Hagood fired rounds of 69 and 73, which was good enough for an aggregate two-under through two days.

Since then, Hagood finished runner-up to teammate Nick Dunlap at the Joe King Memorial tournament at Auburn University Club thanks to a first-round 74 on day one and a bogey-free round of 66 on day two.

His two-day total at the tournament was just two shots off the pace of Dunlap’s winning score of six-under par.

Hagood, who has already signed to play collegiate golf at the University of Alabama at Birmingham, leads Spain Park with a stroke average of 70.5.

In his acceptance speech, he couldn’t thank his parents and coaches enough for all of the sacrifices they have made to help him accomplish this level of success.

By ALEC ETHEREDGE | Sports Editor  We are now three weeks into the 2018 soccer season and slowly starting to... read more