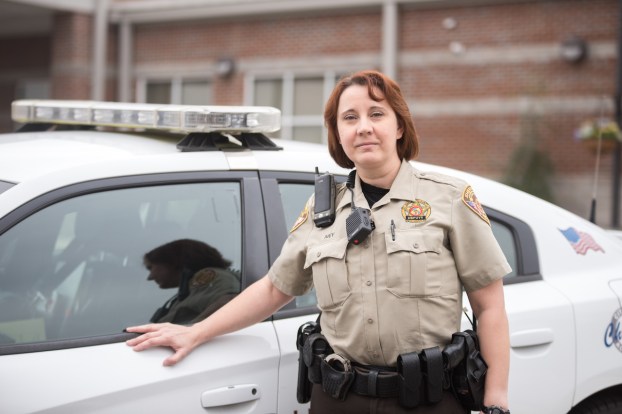 Rachel Ivey has been a deputy with the Shelby County Sheriff’s Office since 2004. (Reporter photo/Keith McCoy)

PROFILE: Rachel Ivey offers her time and talents to children in Chelsea

CHELSEA – For Shelby County Sheriff’s Office Deputy Rachel Ivey, helping children is something that is probably ingrained in her DNA.

“I can honestly say that I’ve always been involved with something to do with helping kids,” she said.

Perhaps it’s being born the oldest of four children that’s made her a natural caretaker. Ivey, who was born in Birmingham but grew up mostly in Oregon, has lived and volunteered her time and talents in the Chelsea community since 2000.

In the years since she’s been a part of the community, she’s managed to make a sizeable impact in the lives of several children. In the summer of 2016 she founded A Minor Film School, which teaches children how to make films using smart phones and tablets.

Ivey said she has such a heart for children because in her experiences they are the ones with the least amount of control over their life circumstances.

“If a child comes from a rough family life, they suffer although they don’t have much control over what’s happening to them,” she said.

But Ivey isn’t looking for any type of recognition or a pat on the back for her good deeds. In fact, she would be perfectly happy if no one knew all she did to make a positive impact in the lives of Chelsea’s youth.

Through her work with children, Ivey hopes to humanize law enforcement in the eyes of youth.

About three years ago, when her daughter was graduating from high school, Ivey reached out to Kings Home in Chelsea.

Kings Home offers a variety of services to at-risk youth, including a group home for girls and boys ages 8-21. Katheria Edwards, Kings Home executive director of youth programs, said 95 percent of the children living in the group homes are under the supervision of the Department of Human Resources.

“These are children who have been removed from a parent or guardian’s home due to a variety of abuse,” Edwards said.

Ivey offered to use her photography skills to take senior portraits for any interested senior. Since the spring of 2009, she has also taken cast and crew headshots for Chelsea High School’s theatre department. She started helping the theatre department when her oldest son participated in the program and just continued after he graduated.

The first year she offered to take photos for kids at Kings Home, not many students took her up on the offer, but as the years have gone by more and more students have participated.

“It occurred to me that these kids need to know that people care about them,” Ivey said. “It seemed like we were getting more calls out there to referee situations, so I wanted to reach out to them.”

During 2017, Ivey photographed 12 seniors and provided them with graduation announcements.

“Every kid deserves to feel special around that time, and I just want to provide them with memorable experiences they might not have otherwise,” Ivey said. “And then one day I was going through and cleaning out my daughter’s closet and found some of her old prom dresses. I put out a call on the Chelsea community page on Facebook to see if anyone else had any old dresses, shoes or jewelry they wanted to donate and I got a lot of responses.”

Ivey collected about a dozen prom dresses for girls at Kings Home.

“When our youths see people in the community offering their help, it helps them start to trust others more,” Edwards said. “When people offer their time to do nice things for them, it makes them feel good about themselves and boosts their self esteem. These kids go to public schools and they see other kids with things that they don’t have and it sometimes makes them feel less than.”

Edwards said things like having a nice prom dress and taking senior portraits helps children in foster care feel like they can be normal and have the life that kids who aren’t in foster care have.

“It gives them a sense of, ‘I can’ – ‘I can be what I dream of being and I can be loved,’” Edwards said. “She also lets us know about job and volunteer opportunities that the kids can apply for and that helps them get out of the house and do things that other kids their age are doing.”

Edwards said DHR is trying to remove the stigma associated with foster care and Ivey’s generosity aids in that effort.

Ivey’s heart for children coupled with being a sheriff’s deputy made her a perfect candidate for Compact 2020. She is working with Compact 2020 to identify Chelsea teens who are using or might be at risk for drug use.

Compact 2020 is a countywide effort that started in July 2016 with the goal of rehabilitating and keeping track of drug court participants, but over time the organization realized that the problem often starts in adolescents.

The focus of the organization then shifted to investigating drug use among teens, but a drug court team still exists. Through investigations, Compact 2020 identifies teens who are using drugs and reaches out to their parents to give them an opportunity to address the problem first.

Compact 2020 equips parents with resources to help their child, such as informing them of suitable rehabilitation programs. The hope is that the teen can be helped before the problem escalates to the point of law enforcement getting involved.

The summer of 2016 was the inaugural year for Ivey’s filmmaking school for kids. The course was birthed from the need for a young adult program at the Chelsea Library. Ivey said about 12 kids attend the monthly classes.

Instead of having parents purchase expensive film equipment, Ivey decided to teach kids how to make films using their tablets and smartphones.

“If they have an iPhone or a tablet they can do it,” she said. “They just need someone to show them how to do it. I’m not bringing in anything too expensive. We use things found at home in their garage and I try to locate any free apps that they can use.”

During the summer of 2017, students acted in and directed a short film called “Alien Ducks.”

In the summer of 2016, film school students submitted 30-90 second long movie trailers to a film festival hosted by Ivey. The trailer for “Alien Ducks,” created by 12-year-old Betsy Samuelson, won best action trailer and fan favorite, and was subsequently the inspiration for the short film.

Samuelson was inspired by alien-looking rubber duck she won from a claw machine. The film follows the story of 8-year-old Vivian, who is tasked with saving the world from an invasion of rubber ducks from outer space.

Samuelson co-directed the film with another student. Ivey and her husband of 25 years wrote the script, with input from Samuelson, and then held open casting calls to fill movie roles.

About 50 percent of the movie was shot outside during one of the hottest times of the year. The film is 11:21, including credits and outtakes.

“It was a lot of hard work,” Samuelson said. “It was a lot harder than we thought it would be. We were all very tired by the end of it, but it was rewarding.”

Samuelson said being a part of Ivey’s filmmaking school has instilled a desire to become a director/filmmaker and an actor.

“It’s really helped me find my purpose in filmmaking. I like how she teaches and she’s very hands-on,” Samuelson. “We get to work a lot in class but it’s fun work and we learn a lot. I don’t think I would’ve discovered my passion for filmmaking if not for Mrs. Ivey’s classes.”

Ivey said she’s never been interested in making a profit from the opportunities she offers to children.

“My passion has always been kids,” she said. “I’m interested in things that support kids in any way, shape or form. I do what I do because I believe that if you see something that needs to be done, you do it. We should all be doing something useful with our time.”