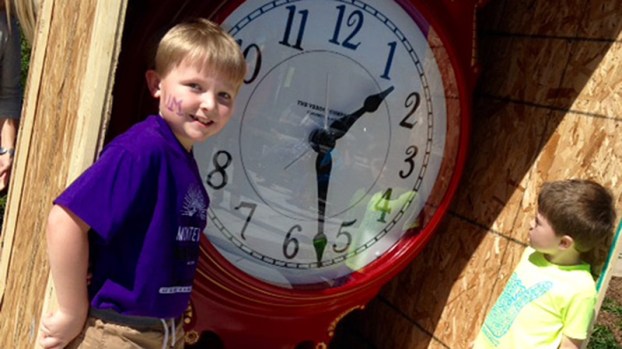 Sun smiles on Love Montevallo Day, plus parks, trees and a clock

Beneath the bright, 70-ish sunshine, Bicentennial Commission Chairwoman Pam Brown Phagan commented: “I honestly think I heard a few people mention that it was too hot.” Perhaps she was feeling the warmth of all that love for this little city with a big heart.

Montevallo showed throughout the day that it doesn’t do things just like, or just because, everybody else does.  When Chamber of Commerce Executive Director Steve Gilbert described the development of Owl’s Cove Park, the erstwhile DJ couldn’t resist a rock reference.

Gilbert looked across the grassy expanse that stretches from the steps of UMOM through attractive hardscape to spreading trees, and he recited Joni Mitchell’s lyrical 1970 line: “They paved paradise and put up a parking lot.”

“Well, here in Montevallo, they took out a parking lot and put in a little bit of paradise,” Gilbert said.

Behind the speakers’ platform a mural covers the side of the building occupied by It’s About Time Barbershop.  And the mural is definitely about time, roughly Montevallo’s early years of the 20th Century. The young boy in the mural’s left foreground is the late J.A. Brown as he looked at about 10 years old.  This mischievous-looking youngster grew up to be a prominent industrialist and the long-time finance chairman of the Montevallo City Council.

Brown’s father, arguably the most prominent Montevallan of the mural’s time, rides in the passenger seat of the Brown company truck.  The truck’s African-American driver is Virgil Smitherman, the great-grandfather of Montevallo Police Captain Tim “Big Tim” Alexander. “People who knew him when he was young tell me that he was twice as strong and big as I am,” Capt. Alexander said.

Another feature of the mural gives the new park its name: Owl’s Cove. Passersby cannot fail to notice a deep red Victorian house at the painting’s far right. That was the home of George Kroell, an Austrian immigrant who prospered in Montevallo. The house was demolished in the 1970’s to make way for the Alabama Power Co.’s building on Main Street, now the University of Montevallo on Main (UMOM for short)

Mayor Hollie Cost led the strolling unofficial procession along Main Street from Owl’s Cove to Bicentennial Park less than two blocks away.  This is called a “streetscape,” she explained, an appealingly organized and handicapped-accessible blend of concrete, bricks and trees to make Main Street a more inviting place.

The streetscape was dedicated in honor of Cost’s mayoral predecessor, the late Ben McCrory. Rick McCrory spoke briefly about his father’s love for Montevallo: “He came from Nashville, and he fell in love with this place.”

“The face of the clock then will be 16 and 1/2 feet up, and it will be a wonderful landmark for Montevallo,” Phagan said. The delay offers an opportunity, she said.  “Now is your chance to take a selfie of your face and the face of the clock.”

Patricia Honeycutt, vice president of the Bicentennial Committee, donned latex gloves to display the city time capsule, soon to be filled with letters, photographs and other mementos of 200 years of Montevallo life.  Offer your history now, she said, for next week the capsule will be sealed, solidly encased in brick and concrete, for Montevallans to open 200 years from now.

Boots and Bowties set for March 8

COLUMBIANA – The South Shelby Chamber of Commerce is hosting its fourth annual Boots and Bowties Silent Auction from 5:30... read more