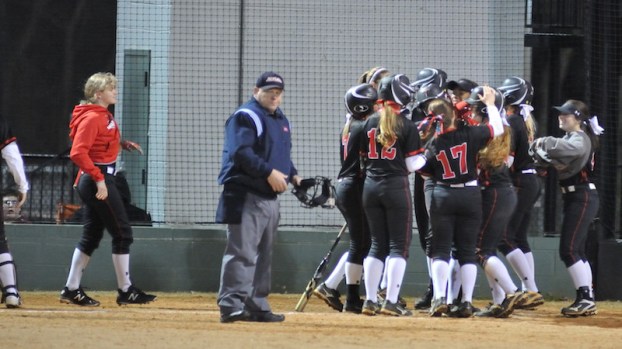 The Thompson softball team got three home runs from Lauren Haskins and posted a strong offensive effort to finish the 2018 Jag Classic with a 3-1 record. (For the Reporter/Larry Dancy)

HOOVER – The Thompson softball team has one thing on its mind in 2018, winning softball games, and that has become evident through the team’s first 12 games of the season.

After going 3-1 at the 2018 Jag Classic, the Warriors improved their overall record to 10-2 on the season having played some of the best talent in the state.

Offensively is where Thompson is hurting teams as the Warriors have scored less than three runs on just three different occasions and have scored five or more runs in nine of their first 12 contests.

That’s a trend that continued into the first three games of the Jag Classic where Thompson was able to outscore Mortimer Jordan, Clay-Chalkville and Cullman 28-1 to kick off the tournament.

It led them to the Sweet 16 of the tournament where Thompson ran into a Tuscaloosa-County team that had its pitching in perfect form. The Warriors’ run in the tournament came to an end by falling 3-1 in that game. Below is a recap from all four of Thompson’s games.

The Warriors needed just two innings to do all of their damage against the Blue Devils as they scored two runs in the bottom of the first and five in the second to take a quick 7-0 lead.

A two-RBI triple from Allie Miller in the first led to both Kindall DeRamus and Lauren Haskins scoring to give the Warriors an early 2-0 lead.

The bats really came alive in the second inning starting with a three-run home run from Haskins. That was followed by an RBI double from Kennedy Foote and an RBI single from Madison Bubel to put Thompson on top 7-0.

Those seven runs gave Bailey Whitfield plenty of support in the circle as she went all four innings to pick up the win. Whitfield gave up just one hit and one walk, while striking out three.

Thompson scored in four consecutive innings against Clay-Chalkville and pitched four scoreless innings to pick up its second straight shutout to start the tournament.

The Warriors used one run in the first, two in the second, one in the third and five in the fourth to win by the final score of 9-0.

The highlight offensively was from Haskins yet again as she hit a home run for the second consecutive game, this time a grand slam in the top of the fourth to conclude the scoring.

Madison Holtzapfel and Eleanor DeBlock combined to toss four scoreless innings in the circle to pick up the shutout, while allowing just four hits and one walk.

Thanks to three home runs it took just three innings for Thompson to finish off Cullman in their first elimination game of the tournament.

For the third consecutive game, Haskins had a home run, while Foote and Bubel also added home runs. The homers were part of an offensive attack that picked up 10 hits and 12 runs in two innings of play.

Haskins led the team again offensively by going 2-for-3 with one run scored and four RBIs. Foote also had an impressive game at the plate with a mark of 2-for-3 with three RBIs and two runs scored. Bubel finished the game 1-for-1 with two RBIs and one run scored.

Whitfield tossed the first two innings of the game in the circle and gave up just one hit while striking out two.

Holtzapfel finished things off in the top of the third by allowing one hit, one run and striking out one.

The offense that had been with the Warriors the first three games slowed down drastically against the Wildcats as they picked up just two hits and one run.

While Thompson gave up just four hits, Tuscaloosa County scored three combined runs between the second and third innings, which was enough to pull off the 3-1 win.

DeRamus and Haskins both finished 1-for-2 in the game, while Touhey had the team’s only RBI with a groundout in the final inning.

For the day, Haskins had three home runs and finished 7-for-10 with 11 RBIs and five runs scored to pace the Warriors’ offense.