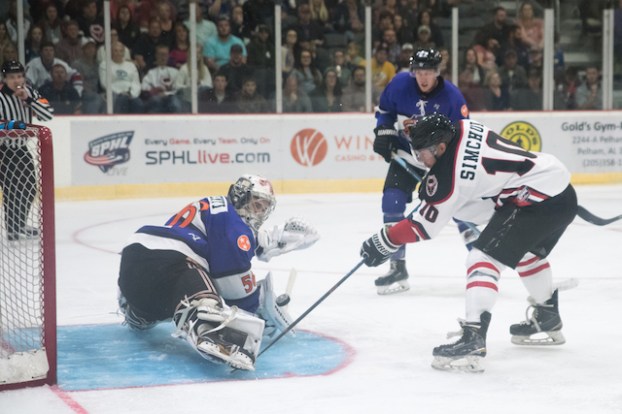 The Birmingham Bulls have won eight of their last 10 games and are one spot and three points out of a playoff spot with 11 games remaining. (File)

The first half of the 2017-18 season, the Birmingham Bulls’ return to the ice was going less than stellar with a 6-16 start to sit in last place in the Southern Professional Hockey League.

But that fortune has changed in recent weeks as the Bulls have now won eight of their last 10 games and boast an overall record of 18-22 with five overtime losses.

Despite sitting in second to last in the league, last place is now in the dust as Birmingham (41 points) holds a 15-point advantage over Fayetteville (26 points).

More importantly, the Bulls have climbed to within three points of a necessary top-8 spot needed to make the postseason.

With the Mississippi RiverKings and Roanoke Rail Yard Dogs both sitting at 44 points and the Evansville Thunderbolts at 47 points, Birmingham is just three points from a playoff spot and six points from the six seed.

With 11 games until the end of the season, it’s a mad dash to see which of those four teams will end up in the playoffs and which one will be the odd team out.

That 11-game stretch for the Bulls is a difficult one with just five of the 11 taking place on home ice. They also take on second-place Pensacola in five of the 11.

Birmingham’s five home games will be against Pensacola from March 9-10 and Roanoke on March 17, before ending the season with back-to-back home games against the Macon Mayhem and Huntsville Havoc on April 6 and 7.

The Bulls have won their last two games in overtime or with a shootout, both of which were key to their playoff push.

On Friday, March 2, Birmingham was able to take down Knoxville 6-5 with a shootout victory to gain two important points rather than one. Josh Harris ended the game with a hat trick after scoring two goals in regulation and one in the shootout.

The following day, the Bulls picked up another win against Knoxville thanks to an overtime goal from Caleb Apperson on a power play.

Other goals in the game came from Taylor Dickin, Shane Topf and Craig Simchuk. Justin Larson had three assists to lead all point-scorers with three.

Along with the recent success on the ice from a team standpoint, Justin Larson was named the most recent player of the week by the league.

In the series with Knoxville, Larson was able to score one goal and picked four assists to lead the Bulls to a weekend sweep.

To check out the Bulls’ upcoming schedule visit Bullshockey.net or Thesphl.com

By ALEC ETHEREDGE | Sports Editor HOOVER – The Oak Mountain Eagles are soaring through 11 games of the 2018... read more