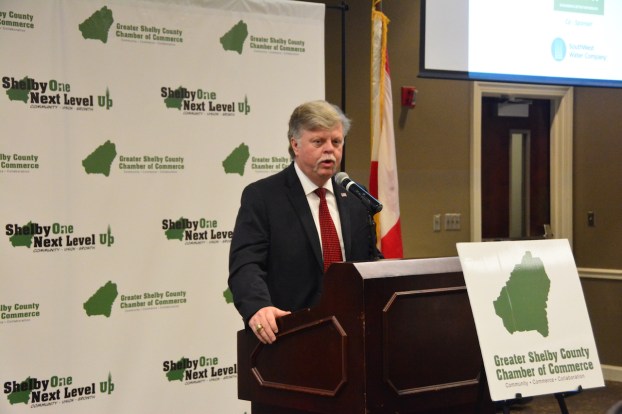 Helena Mayor Mark Hall gives an update on projects in the city of Helena at the Greater Shelby County Chamber of Commerce’s annual State of Our Communities luncheon on Wednesday, Feb. 28. (Reporter photo/Briana Harris)

County mayors give updates at luncheon

PELHAM – The mayors of several Shelby County municipalities came together for the Greater Shelby County Chamber of Commerce’s annual State of Our Communities luncheon on Wednesday, Feb. 28, at the Pelham Civic Complex.

Each mayor updated the audience on what’s been happening in their respective communities.

Here’s what each mayor had to say:

“We don’t have a lot going on, but we have a whole lot of challenges,” Riggins said.

Riggins said the city is trying to prevent annexation from neighboring cities such as Chelsea and is working with economic development entity 58 Inc. and the GSCCC to help the city grow economically. Riggins said he is in talks with both organizations to see what types of businesses would best suit the small city.

He said moving the city’s Internet access into the 21st Century is also a priority.

“We’ve got to be on top of developing businesses and jobs in Westover,” Riggins said. “We’re also looking for developers to build homes in a subdivision that’s been vacant for about 10 years. That’s a challenge.”

McAllister said the city’s housing market has been struggling ever since 2008 when the real estate market crashed. A developer had plans to build several homes in the city, but the subdivision flopped.

“We’re a jewel sitting out there waiting to pop and it’s going to happen,” he said. “We know it will.”

McAllister also said the town recently purchased land to expand one if its parks and purchased two new police cars. The town’s fire department also improved its Insurance Service Office rating from a six to a five.

“We’re also working to complete the outdoor courts adjacent to the rec center and the widening of Interstate 65 is under way,” Waters said.

Waters said the city is going through a period of transition as it adjusts to having a city manager.

“Put up or shut up time comes awful quick when you have someone who comes in and completes an internal audit,” he said. “She clearly understands the way we do things, the question is why do we do it that way.”

Although the process has been challenging, Waters said it’s helpful to “have a new set of eyes on an old problem.”

The city recently completed its downtown streetscape project and is partnering with the University of Montevallo on a number of projects, including workforce development, organizing a citywide transit system and offering free wireless Internet downtown.

A challenge for the city is combating widespread poverty. Cost said more than 25 percent of the population lives in poverty and more than 60 percent of students receive free or reduced lunch at school. Cost said job training for adults, quality education and a citywide preschool system are ideas that they city has to combat the problem. Shelby County Women United is a program that is in the works that will focus on connecting single women with children to services throughout the county.

Brocato said the Hoover Police Department recently added two school resource officer positions. The move means that all Hoover schools will have an SRO on site at all times. Brocato said the city is also working to complete its comprehensive plan by the end of the year.

“We’re also working to reeducate developers on how we want our shopping centers to look,” he said. “We want more streetscapes and sidewalks and to diversify our economy.”

Brocato said the city is working to market itself as a STEM (Science, Technology, Engineering and Math) city and to create tech corridors.

Brocato said the city recently landed some new businesses – IberiaBank and McLeod Software Corporation will both be bringing about 500 jobs to the city.

Hall said the city’s greatest challenge is traffic. The city is hoping to partner with the Alabama Department of Transportation and area cities to four-lane Alabama 261. He said plans to make upgrades to Shelby County 52 and Morgan Road are also in the pipeline.

“We need traffic relief,” he said.

Intersection upgrades are planned for the city’s elementary school, and he highlighted that the city has contributed $9 million to Shelby County Schools in recent years.

He highlighted the Buck Creek Festival and First Fridays as some of the city’s popular attractions.

Greene said the city is working to restore a 203-acre golf course that was donated to the town a few years ago. The golf course is being reconstructed and will hopefully open sometime this year. The town also has plans to open a 14,000-square-foot community center and received a $600,000 grant to upgrade its water system – including meters, water tanks and water lines.

Some streets throughout the town were repaved in 2017 and Greene said he is working with the GSCCC and 58 Inc. to improve the city’s economy and to meet the demands of the public.

Handley said Columbiana has always been a social community. He highlighted events that bring the city together such as Music on Main and Cowboy Day. The city was recently named a Main Street Alabama city, which is part of an effort that focuses on bringing jobs, dollars and people back to Alabama’s historic communities.

The city also is also working to launch a new website, the city recently purchased two new fire trucks and a $1.3 million sewer renovation project is currently under way. He said highway renovations are also on the way from ALDOT.

Picklesimer said a road project that connects Columbiana to Chelsea is in the works and three road projects were completed by ALDOT over the past year. The city is updating its comprehensive plan and its renovated library is set for a late March reopening. In addition to the library, renovations to the city’s athletic complex are nearing completion.

The city recently landed three new businesses that will each bring new jobs to the city. In 2017, the city had more than 200 building permits and is one of the fastest growing cities in the county.

Handlon said a growing community has a lot of needs, but the city is always striving to improve and maintain its quality of life. She said she’s excited about the recent opening of the new Thompson High School, the ongoing construction on Thompson Road and ALDOT’s Interstate 65 widening project.

The city is partnering with the Angel Warriors Foundation to offer Fourth Fridays to residents. The city is also in the design phase of constructing a recreation center and recently purchased 16 acres at Veterans Park.

When it comes to the economy, Handlon said the planned shopping center District 31 will change the landscape of the community.

The mayors of Calera, Indian Springs and Wilsonville were not present at the luncheon.

By GRAHAM BROOKS / Staff Writer Vehicle owners in Shelby County will experience a few changes when it comes to... read more