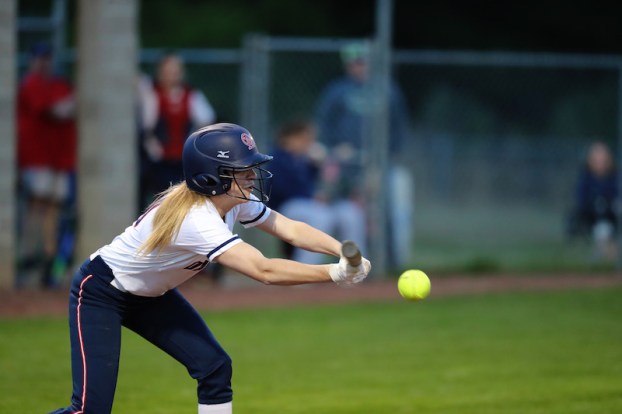 Oak Mountain was able to go 6-0 at the 2018 Jag Classic, before losing the championship game 8-4 to Sparkman. (For the Reporter/Cari Dean)

HOOVER – The Oak Mountain Eagles are soaring through 11 games of the 2018 softball season after a runner-up finish at the Jag Classic on Saturday, March 4.

Heading into the tournament with a record of 3-1, the Eagles had already shown impressive play through four games, but went on to prove they can be a state championship contender with stellar play in the tournament.

Oak Mountain put together six straight wins, two pool play wins and four elimination wins, to put themselves in the championship game of the tournament against 2016 state champion Sparkman.

The biggest win, and closest win, for the Eagles came in the quarterfinals against area foe Spain Park.

Being a tournament game with several games played that day, the teams were only playing a three-inning game, which limited opportunities.

The Eagles, however, were able to start with a bang by posting four runs in the bottom of the first to answer the one run the Jags scored in the top half of the inning.

With one out in the inning, Oak Mountain was able to put together three consecutive singles, before an error and a wild pitch allowed three runs to cross the plate.

Spain park was able to put two runs on the board in the top half of the next inning thanks to a two-RBI single from Maddie Majors, but the Jags still trailed by one run.

The Eagles added an insurance run in the bottom of the second thanks to a Jenna Galloway triple. She eventually scored on a wild pitch to make the score 5-3 with one inning remaining.

For a while, it looked like Spain Park was going to at least tie the game in the top of the third thanks to some early damage in the inning.

A single and a double to lead off the inning put two runners in scoring position for the Jaguars with no outs.

An error during the next at bat allowed Lindsey Parker to score and kept two runners on second and third with no outs.

The comeback error came to a drastic halt during the next at bat as Kate Campbell hit into a triple play to end the game in Oak Mountain’s favor at 5-4.

Galloway led Oak Mountain going 2-for-2 at the plate with two runs scored, while Cassady Greenwood went 1-for-1 with an RBI and one run scored.

Maddie Majors was the main highlight for Spain Park, going 2-for-2 with three RBIs and one run scored.

A five-run fourth inning was the difference in the championship game against the Senators.

In the top of the first inning, Sparkman made its presence known early thanks to a two-RBI double that gave the Senators an early 2-0 lead.

Oak Mountain, however, answered back in the early going with three runs between the bottom of the first and second innings.

In the first, the Eagles used a double and a single from Galloway and Abbi Brown in back-to-back at bats, which accounted for their only run in the first inning.

Galloway found her way back to the plate in the bottom of the second and gave Oak Mountain its first lead with her second double of the game. This time she drove in two runs and Oak Mountain grabbed a 3-2 advantage.

The third inning was a quiet one with six consecutive outs.

Sparkman came to the plate in the top of the fourth and changed that quiet play quickly.

The Senators strung together a single, a double, another single and back-to-back hit batters to bring in two runs. It only gave Sparkman a slim 4-3 lead, but a triple two batters later with one out in the inning cleared the bases and brought three runs home to give the Senators a 7-3 lead.

Sparkman added one run in the top of the fifth as well to extend its lead, while the Eagles added just one more run in the bottom of the sixth to create the final score of 8-4.

Galloway went 1-for-3 at the plate with an RBI, a walk and one run scored. Maddie Katona was 2-for-3 as well with one walk, while Bronwn went 1-for-2 with one RBI.

Oak Mountain ended the tournament with a 9-2 overall record ahead of area play.

By ALEC ETHEREDGE | Sports Editor NORTH SHELBY – While Briarwood and Calera combined for 26 hits in a softball... read more