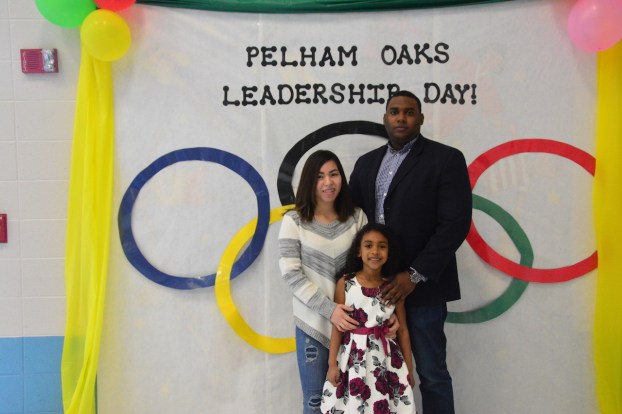 Parents Linda and Nelson Watters attended Leadership Day at Pelham Oaks on Friday, March 2, to see what their daughter, Khloe, has been learning in school. (Reporter photo/Briana Harris)

PELHAM – Dozens of parents filled the hallways of Pelham Oaks Elementary on Friday, March 2, for the school’s inaugural Leadership Day.

The day served as an opportunity for parents to see what their children are doing in school, according to Pelham Oaks principal Deberah Miller. Leadership Day aligned with the school’s the Leader in Me program that teaches 21st century leadership and life skills to students and creates a culture of student empowerment based on the idea that every child can be a leader, according to the program’s website.

Miller said the Leader in Me program helps students identify what leadership qualities are and helps them identify those qualities within themselves. During Leadership Day, students took the lead on showing their parents what they’ve been working on in school.

“It’s important to highlight our kids,” she said. “They’ve been learning skills throughout the whole year and today is the day they get to show their parents what they’ve learned.”

Kindergarten teacher Caron Riley said her students showed their parents that they can program a robot called Bee Bot.

“Bee Bot is a learning tool to teach sight words and things like following directions,” Riley said. “The students can program him to go to a sight word, a number of whatever skill they’re working on. They also talked to their parents about their goals, like writing their name, numbers and letters.”

Nelson Watters, whose daughter Khloe is in Riley’s class, said he has seen significant changes in his daughter since she started school.

“She’s opened up a lot,” he said. “She used to be so shy in preschool, but today she was one of the student greeters for Leadership Day. She helps a new student who is from Asia and barely speaks English. They’re best friends now and Khloe helps her complete assignments.”

Watters, who also has a second-grade daughter at the school, said Khloe can read fluently and takes on new tasks well.

“When I was in school things were a lot different,” he said. “This school gives me some hope because they celebrate your kids and they invest in the kids here. They teach your kids what steps they need to take to be successful, and they show them how to get there instead of just saying go and be great.”

“In the past we’ve done dress up days and pajama day, but this year we took a different approach,” Miller said. “The teachers wanted to focus on the academic aspect of it and on the idea of readers being leaders, which is why they wanted to tie it into Leadership Day.”

Miller said the day was a success.

“Just watching their faces and their reactions while participating in some of the activities was so wonderful,” she said.

By ALEC ETHEREDGE | Sports Editor The first half of the 2017-18 season, the Birmingham Bulls’ return to the ice... read more