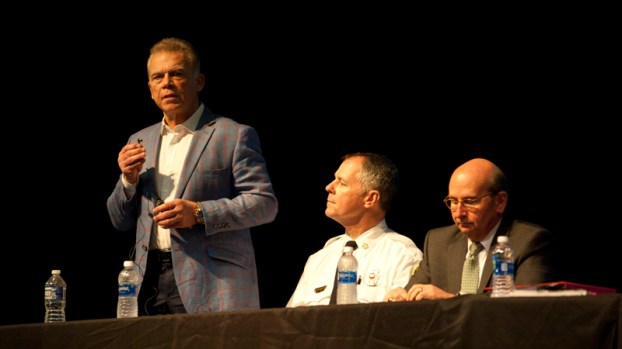 From left, Hoover Police Department Chief Nick Derzis, Fire Chief Clay Bentley and Mayor Frank Brocato were among the members of a panel that discussed school safety with the public during a meeting on March 6 at Spain Park High School. (REPORTER PHOTO/STEPHEN DAWKINS)

HOOVER – With the Feb. 14 shooting at Stoneman Douglas High School in Florida weighing on the minds of students, parents, school officials and city leaders, a safety meeting was held at Spain Park High School on Tuesday, March 6.

Kathy Murphy laid out guidelines for the “Focus on School Safety,” including being respectful and limiting comments to three minutes per person.

SPHS Principal Larry Giangrosso introduced two students who are part of a group that formed to assess and possibly offer recommendations about school safety.

Anastasia Zellner and Mohammed Akhtar were the first members of the audience to address the panel.

Akhtar, a senior, said more should be done to address mental health issues, and Zellner, a junior, asked whether “Alert, Lockdown, Inform, Counter, Evacuate” strategies could be incorporated.

“We feel like sitting ducks sitting in our classrooms waiting to see if it’s real or not,” Zellner said.

Questions and suggestions included steps to control traffic around schools, requiring students to wear identification badges, items such as blackout shades that could enhance safety in classrooms during a lockdown, how officials can intervene when a student is troubled, metal detectors, the number of SROs in schools and treatment of children with special needs.

At the beginning of the event, Murphy highlighted ongoing school safety efforts across, the district.

Murphy said 1,293 video surveillance cameras are in place at schools across the district, including 250-300 at the district’s two high schools, and 82 more are set to be added by the summer.

“Every school in Hoover has a school safety plan,” Murphy said.

Murphy noted the complexity of securing doors at schools, particularly high schools, which can have numerous exterior exits (Hoover High School has more than 100, for example) and students coming and going throughout the day.

By GRAHAM BROOKS / Staff Writer HELENA–Heading into its 17th year of existence, the Buck Creek Festival in Helena has... read more