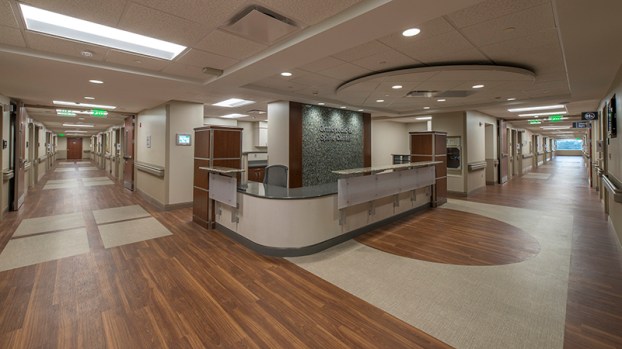 Once the aesthetic upgrades are made to public areas throughout Shelby Baptist Medical Center, the hospital will have a more uniform, modern appearance, hospital officials said. (Contributed)

ALABASTER – Shelby Baptist Medical Center Chief Strategy Officer Christine Ferguson is blunt when describing the process of walking from one end of the hospital to the other.

“It’s like walking through different time periods,” Ferguson said with a laugh. “We are going to update the fit and finish to make everything feel more cohesive and modern.”

Since SBMC was built in the late 1950s, it has seen significant expansions and updates to coincide with Shelby County’s growth. But as with any similar building, the hospital still shows some aesthetic qualities of its roots, especially along the hallways of the hospital’s original central facility.

Once the project begins in the next few weeks, it will bring woodgrain flooring, new solid surfaces, upgrades to the cafeteria and other public areas such as restrooms.

“Really, we’re trying to bring the aesthetics up to the level of care we offer here,” Ferguson said.

The aesthetic updates are part of a larger $22 million project begun at the hospital after the merger between Baptist Health System and Brookwood Medical Center was finalized. The project began in 2017 in the hospital’s diagnostic center with the addition of new MRI and CT machines and a 3D mammography machine, which “provides a clearer, more robust image and as a result can be a great tool in early breast cancer detection,” Ferguson said.

In late March, the diagnostic department will completely refurbish an older MRI machine with state-of-the-art technology.

“Diagnostics was a great place for us to start, because it touches all other departments in the hospital,” Ferguson said.

Another major project will be in the hospital’s operating room, which will be upgraded to include a hybrid operating room, allowing for procedures such as aortic valve replacements to be completed through a catheter rather than a traditional open procedure.

Ferguson said Shelby Baptist is making an effort to improve its services and involvement in the community to reconnect with those who do not currently use the hospital for their medical care.

“For whatever reason, some people have a negative view of the hospital from the past. We’re trying to do whatever we can to bring them back in,” Ferguson said, noting the hospital is planning a community health fair and recently formed a partnership with the Alabaster City School system. “We need to bring Shelby up to what this community is growing into.”