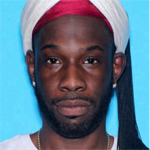 At about 4:30 p.m. on Tuesday, March 6, an officer conducted a traffic stop on a vehicle was it was pulling into the U.S. 280 Walmart parking lot.

“The driver was immediately uncooperative—exiting his vehicle and then re-entering and reaching for the center console,” according to a press release from Hoover Police Department. “A physical altercation ensued when the officer realized the suspect was reaching for a handgun. The struggle continued until two citizens came to the aid of the officer, helping him subdue the suspect.”

The officer sustained a bite wound on his arm and was treated and released from Brookwood Baptist Medical Center Freestanding Emergency Department.

Further investigation revealed the suspect was wanted for a probation violation on an aggravated assault case from Dekalb County, Georgia, according to police.

The handgun in his possession was also stolen from Huntsville, according to police.

The suspect is being held at the Shelby County Jail with bond totaling $33,500.