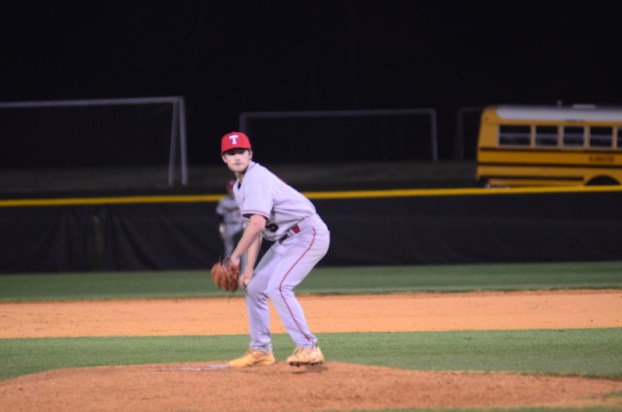 Sam Pearce picked up a complete-game shutout and allowed just two hits against Gardendale, while striking out nine batters. (File)

GARDENDALE – A slow 1-4 start for the Thompson Warriors has all of a sudden turned into a .500 record after shutting out Gardendale 7-0 on the road on Wednesday, March 7, to pick up their third consecutive win.

Now 4-4 on the season, the Warriors are playing much better baseball having reeled off a 9-3 win against Austin, a 5-4 win against Moody and a 7-0 win against Gardendale.

Even Thompson’s last two losses of the season, 2-1 to Buckhorn and 3-0 to Helena, weren’t bad losses. That stretch of two games, especially the tight contest against Helena, seemingly showed the Warriors that they can compete against anyone.

Now they look like the team that was close to going to the playoffs last season in a difficult area that features Vestavia Hills and defending state champion Hoover.

Gardendale came into its matchup with the Warriors boasting a 5-2 record and a three-game win streak, but Thompson got one of its best pitching efforts of the season from Sam Pearce and also put together eight hits at the plate to snap the Rockets’ win streak and keep theirs alive.

The strong play at the plate started in the first inning and continued for the first three innings of play as they had all seven of their runs at the end of the top half of the third.

Thompson got it started in the first with their best offensive inning of the game. The Warriors put together three consecutive singles from Myles Brown, Nick Freeman and J.C. Parker to load the bases with no outs.

Grayton Arrington then drew a six-pitch walk that brought home Thompson’s first run of the game.

After a strike out, Chris Miranda stepped to the plate. During his at bat a wild pitch allowed Freeman to score for the Warriors’ second run of the inning before Miranda singled on a line drive to right field to drive in the third run of the inning.

A walk from Josh Huner and then a sacrifice fly from Sam Pearce followed with the Pearce sac fly bringing in Thompson’s fourth and final run of the inning.

The Warriors were able to bat all the way through the order in the first inning, which allowed Brown to step back to the plate to lead off the top of the second.

He took advantage of his second at bat of the game drove it past the center fielder. That’s when Brown showed off his speed and legged out a lead-off triple to kick start the inning.

Freeman picked up an RBI groundout during the next at bat to drive Brown home for Thompson’s only run of the inning, but the Warriors’ fifth run in two innings of play.

Gardendale went 1-2-3 in the bottom half of the inning, which brought Thompson right back to the plate.

In the top of the third, Miranda led off the inning by being hit by a pitch. A pop out followed, but Thompson strung together three big hits after.

Pearce picked up a single to put two runners on base, before Nick Walker doubled to left field to bring Miranda in and advance Pearce to third.

That’s when Brown stepped to the plate and picked up his third hit in as many innings to bring home Thompson’s seventh and final run of the game.

Those seven runs were all the cushion the Warriors needed as Pearce was locked in on the mound. He went on to throw a complete-game shutout and allowed just two hits. He also struck out nine batters on 89 pitches.

Brown finished the game 3-for-4 at the plate with one RBI and two runs scored. He was a double and a home run away from hitting for the cycle.

The Warriors are now 4-4 this season after their three-game win streak.

By ALEC ETHEREDGE | Sports Editor Softball has always been strong in Shelby County, but early in the 2018 season... read more