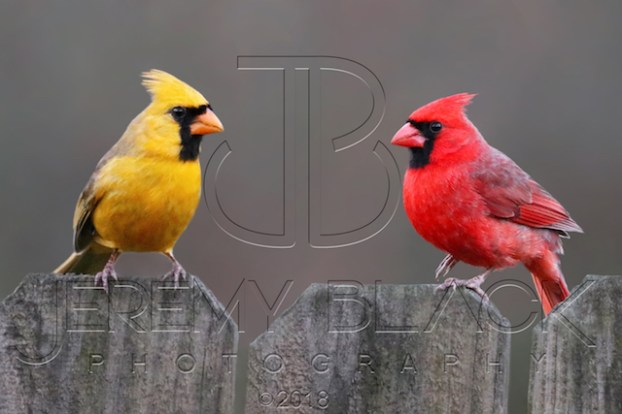 Local photographer Jeremy Black has been taking photos of a rare yellow cardinal since he was first spotted in Alabaster in late January. Black is likely the first person to have taken a high-resolution photograph of a yellow cardinal with a red cardinal. (Contributed/Jeremy Black Photography)

ALABASTER – When Alabaster resident and local bird enthusiast Charlie Stephenson first spotted a rare yellow North American Cardinal, she had no idea her story would make headlines all over the world. The cardinal, which gets its yellow color from a pigment mutation, is typically only seen once a year in the United States.

“It’s just too weird to me,” Stephenson said. “I’m still thinking, ‘Wow, this is a different kind of bird.'”

Stephenson first spotted the bird in late January, she said she didn’t realize how rare he was until she contacted Auburn University biologist Geoffrey Hill. The bird is a fully-grown male, and has since been seen in several places close to Buck Creek Park and Warrior Park in Alabaster.

Local photographer Jeremy Black, who was initially asked by Stephenson to take pictures of the bird, said he is astounded to have his work and her story featured by media outlets including National Geographic, USA Today, the Washington Post and People, as well as by outlets in foreign countries like Italy and Russia.

“We’ve been featured everywhere,” Black said. “It’s beyond unbelievable. It’s so exciting to have my photo go worldwide.

While she has seen an increase in traffic near her residence, Stephenson said most people have been respectful of her privacy and property. Stephenson said she is mainly observing the bird through a scientific standpoint, but it glad to see the local birding community receive international attention.

Black said his studio, Jeremy Black Photography, has also received more clients since the photo was released. Black said he is likely the first person to ever capture a high-resolution photo of a red cardinal and a yellow cardinal together. Photos of his work will be featured in an exhibition at the Birmingham Festival Theatre and is currently selling prints of his work on his website Jeremyblackphotography.com.

“It’s definitely helped business a lot. I’ve had a lot of print sales and I’ve had more people book sessions with me,” Black said.

As Stephenson and Black have continued to watch the bird over the past few weeks, they noticed that he had found a friend in a red cardinal with an injured leg. He later found a female friend, and might possible begin building a nest and mating with her soon, which would make him much more elusive.

“If that happens, he’ll probably stick around,” Black said. “Once spring happens and everything is green and lush, he’s going to be hard to spot.”

Currently, Black and Stephenson are collaborating on a map to help visitors spot the bird while keeping him safe in his natural habitat.

The following churches in Shelby County will have church services to celebrate Easter on Sunday, April 1.   African Methodist... read more