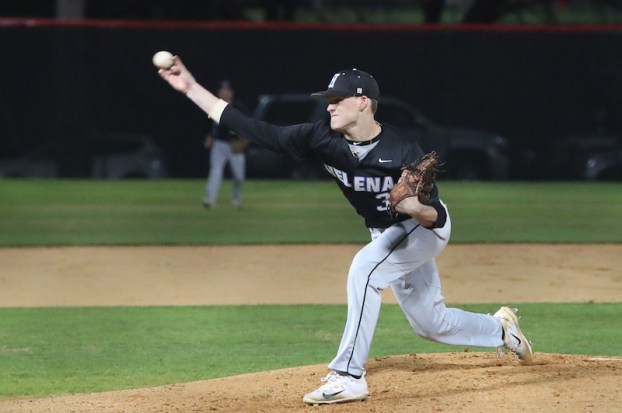 Helena's Landon Green tossed 14 strikeouts to pick up a win against the Thompson Warriors by a final score of 6-3. (For the Reporter/Dawn Harrison)

ALABASTER – Both Helena and Thompson were able to pick up five hits apiece in their matchup on Thursday, March 8, but five errors by the Warriors and a three-run second inning seemed to make the difference as the Huskies squeaked out a 6-3 win.

The game was never dominated by either team nor out of reach for Thompson, but Helena just capitalized on a few more opportunities as they left two less base runners on base throughout the game.

The biggest positive for Helena was Landon Green, who despite giving up two runs was locked into a zone on the mound all night.

In just five innings of work, Green struck out 14 batters for 14 of the 15 outs that were recorded while he was on the mound. He walked off the mound with the lead and Josh Daugherty finished the final two innings off by allowing just one run on two hits and three walks.

Offensively, Thompson struck first in the game in the bottom of the opening inning.

Myles Brown continued his impressive play at the plate with a lead-off double to center field to put a runner in scoring position with no outs.

After a foul-tip out, J.C. Parker reached on an error to put runners on the corners with one out. Grayton Arrington then stepped to the plate and drove a ground ball to left field that allowed Brown to score for a 1-0 lead at the end of the first.

Helena let that early one-run deficit spark the offense in the top of the second as they stormed in front to take a 3-1 lead.

John Heacock and Tyler Santos started off the inning with a single and a walk, respectively, to put runners on first and second with no outs.

That was followed by an RBI-single from Nick Thompson and a double from Colton Hood to give Helena three total runs with no outs in the inning.

That was all the damage they were able to do in the inning, but it was enough to give the Huskies an early 3-1 lead.

With two outs and two runners on, Helena was close to getting out of the bottom half of the inning without allowing another Thompson run.

In a 1-2 count, however, Nick Freeman singled to left field with a fly ball that found the grass. That hit allowed Josh Huner to cross the plate to cut the deficit to 3-2 after two innings of play.

The next two innings went by without either team threatening until the Huskies added to their lead in the top of the fifth.

This is where the errors came into play for Thompson. An error to start the inning allowed Trevor Bell to reach. After he was sacrificed over to second with a bunt and a second out was recorded, the Warriors committed their second error of the inning which allowed Bell to cross the plate.

Helena’s 4-2 lead held up until the top of the seventh when a Nick Ragsdale double and a Brody Moss single combined to bring in the Huskies’ final two runs of the game as they took a 6-2 lead into the bottom of the final inning.

Thompson was able to add another run in the bottom of the seventh when an error on a Parker fly out allowed Brandon Hornkohl to score for the game’s final run of the 6-3 contest.

Ragsdale, Ross, Thompson and Hood all had RBIs for Helena as five different players picked up a hit.

Brown led Thompson by going 2-for-3 with one run scored and a walk. Freeman and Arrington picked up both of the Warriors’ RBIs.

By ALEC ETHEREDGE | Sports Editor Temperatures in the 40s didn’t scare away several soccer teams as they took to... read more