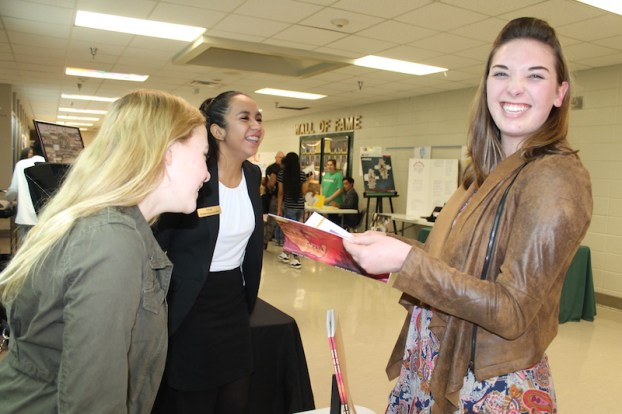 Following a brief welcome in the auditorium, students and parents asked questions in the auditorium lobby. Clubs, electives and extracurricular activities were represented at tables surrounded by students, teachers, coaches and advisers.

Situated between PHS Band and the PHS Art table, the Literary Magazine and Creative Writing table received many visits from students and parents drawn to the color and excitement of all three programs.

“Look Sophia, this is so interesting,” one rising freshman mom said as she turned through the pages of the magazine. Sophia looked on with her mom.

When I asked Sophia if she liked magazines, she nodded her head with a smile. Her perfectly-paired ensemble revealed that she cared about presenting impressively.

Another student approached asking questions. The hint of gray from her shirt perfectly matched a stripe in her sweater. Imagining her delight at discovering the eyedropper tool in Adobe InDesign that allows students to retrieve an exact color from photos and art to use when designing literary magazine spreads.

“You’d learn Adobe PhotoShop and InDesign to create the magazine. You’ll work with color, artwork, photos and student writing—perhaps even some of your own work.”

I told upcoming freshmen and parents about Erin, the amazing copy editor who began in Lit Mag as a freshman and two current juniors in Lit Mag who took Creative Writing as freshmen and Lit Mag as sophomores. They designed the cover that won second in the state. I told students about Louie who thought of the title of the 2017 magazine—Phoenix. I shared stories about Sam, Lalo, J’ore’alle, Lauren, Maria, Juan, Kaylie, Makenzie, Chase, Justin and Lupita.

Wondering which of the new freshmen will soon star in writing stories, I carried Lit Mags back to my room completing my last 2018 February day-into-night.

By CONNIE NOLEN / Community Columnist If I ever mention Billy Crandall in front of students, remarks like, “Mr. Billy... read more