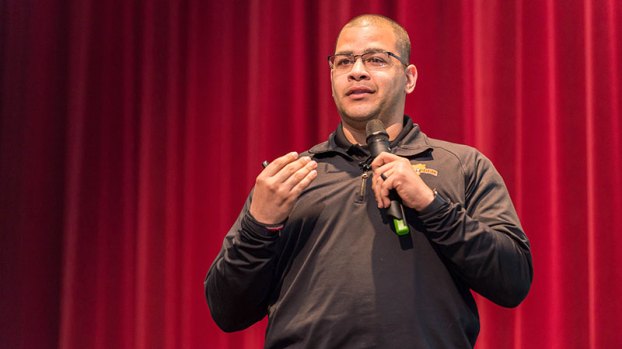 ALABASTER – Two speakers at Bradford Health Services’ Parent University on the night of March 8 knew firsthand the pain brought by issues such as substance abuse and distracted driving.

Mike Bailey, whose daughter, Ashlynn, died after taking fentanyl-laced heroin in 2016, said he chose to speak at the event to prevent similar tragedies in the future.

“I don’t want anyone to have to go through what I had to go through,” Bailey said to the dozens of parents gathered in the old Thompson High School auditorium. “Be aware of what you’re dealing with, and don’t make light of it. (Drug issues are) a big problem. It’s something as parents we have absolutely got to be proactive about.”

Bailey said his daughter started out smoking marijuana in high school, which led to pills such as Xanax, opiates and then heroin. In addition to not making light of substance abuse issues, Bailey encouraged the parents of children facing drug problems to establish a support system for themselves and to “Understand you are (your child’s) only true hope.”

Bailey was one of several speakers during the event, which was held to help local parents learn about and deal with a range of issues their children may be facing.

Michelle Lunsford, spoke at the event only a couple of weeks after he daughter, Camryn Callaway, died as the result of a texting-while-driving wreck involving an 18-wheeler in Pelham, encouraged the parents to set good examples for their children.

“We are all here tonight because we have children and we love them. Be the role model they need to see. Change has to start at home,” Lunsford said. “Putting your phone down is a whole lot easier than picking out what color flowers you want on your child’s casket. She was not the first person to die because of distracted driving, but let’s make sure she will be the last.”

“Cell phones and social media are a gateway to anything they could want. Anything you can possibly imagine can happen through a cell phone,” Myers said.

He said Life360, a free app for iOS and Android, allows families to see their loved ones’ locations and receive notifications when they arrive at destinations such as school, work and home.

Circle with Disney is a paid program allowing parents to control and manage their children’s internet connections and activity, even on devices not dependent on Wi-Fi.

“Knowing where they are and holding them accountable is very important for us as parents,” Myers said.

Angela Camp with Bradford Health Services encouraged parents to allow their children the independence to build their own resiliency.

“To build resiliency, you’ve got to fail at some point. As a parent, it’s hard to allow those failures to happen. But it’s necessary, because we want our children to learn those coping mechanisms, and so they will know there are consequences for their actions, both negative and positive,” Camp said.

“If you don’t hear anything else I say tonight, hear this: Children will live up or down to our expectations,” Camp said.