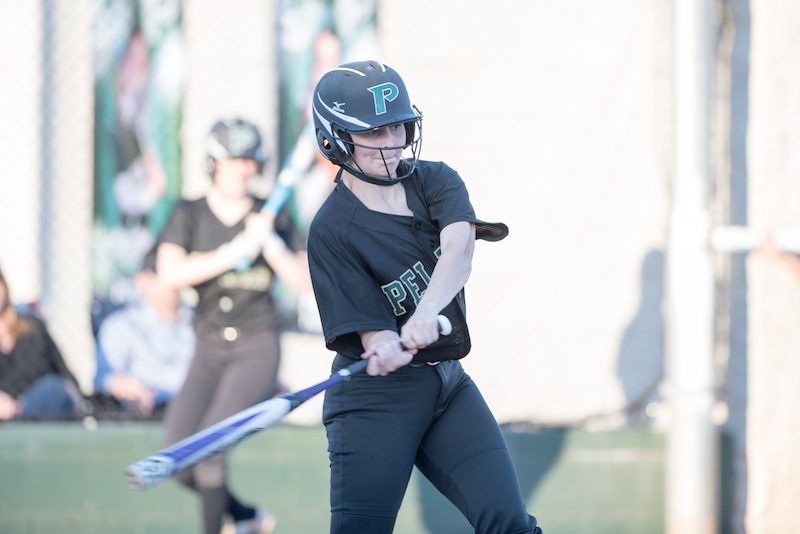 Pelham's bats were alive on Thursday, March 8, as the Panthers picked up 16 hits and 11 runs in a 10-run win against John Carroll. (Reporter photo/Keith McCoy)

BIRMINGHAM – It’s been an up-and-down season through nine games for the Pelham Panthers’ softball team, but on Thursday, March 8, the Panthers ended the night on the up side of that scale with an 11-1 win against John Carroll Catholic High School.

After recording just five hits and being shutout 6-0 in its first area game of the season a day earlier against Helena, Pelham rebounded with 16 hits and 11 runs in an offensive explosion against the Cavaliers.

The Panthers scored runs in all but the first and fourth innings to contribute to the impressive efforts, while Brianna Copeland posted a complete-game win in the circle with 10 strike outs.

Pelham’s first run of the game came in the top of the second inning thanks to a two-out rally sparked by a Holly Helms single.

Helms eventually stole second during Lauren Watts’ at bat before Watts was able to hit a fly ball to right field that fell for an RBI-double.

After Copeland struck out two of three batters in a 1-2-3 bottom half of the second, the Panthers came back to the plate ready to add to their lead in the top of the third.

Yet again all of Pelham’s scoring came with two outs. The inning was highlighted by two triples as Kaylyn Tomlinson picked one up wedged between two outs, followed by an RBI-triple from Emily Shirley two batters later.

That was followed by a walk from Nevaeh Banks and an RBI-single from Helms to give Pelham a 4-0 lead.

The next 1 ½ innings was quite until Pelham’s offense struck and put together seven runs in the final three innings.

Shirley led the top of the sixth off with a solo shot over the left field wall to give the Panthers a 5-0 lead, before an error later in the inning gave them an additional run when Copeland crossed the plate.

Pelham’s best offensive inning, however, was still yet to come as they posted a game-high four runs in the top of the sixth.

The Panthers used five singles in the inning to take a 10-0 lead into the bottom of the sixth.

John Carroll finally got on the board in the sixth with a solo home run, but Pelham answered back in the top of the seventh to add their 11th and final run of the game.

Watts led the Panthers at the plate as she went 2-for-4 with three RBIs. Helms added a 3-for-4 day with an RBI and a run scored, while Shirley went 2-for-5 with two RBIs and two runs scored.

Tomlinson and Hanna Pritchett also had multiple hit games. Tomlinson was 2-for-5 with one run scored and Pritchett was 3-for-4.

Copeland got the complete-game win after allowing just one run and five hits, while striking out 10.