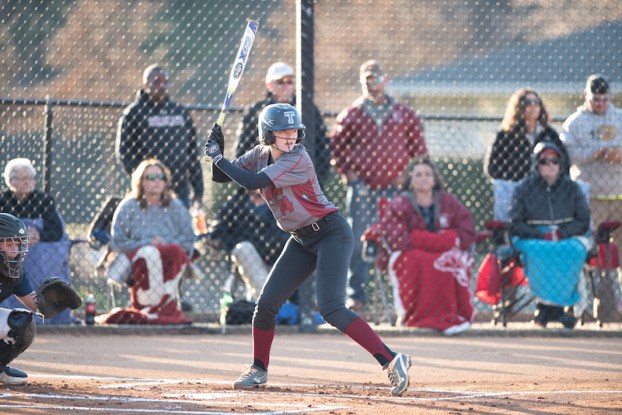 Shelby County was able to take down Briarwood 8-6 in a game that featured 26 combined hits on Thursday, March 8. (Reporter photo/Keith McCoy)

NORTH SHELBY – The Shelby County Wildcats’ softball team is off and rolling in 2018, having now scored 56 runs in four games after taking down Briarwood 8-6 on Thursday, March 8.

In a game that featured a combined 26 hits and two different ties, the Wildcats were able to land the final blow by outscoring the Lions 4-2 over the final three innings.

While the seventh inning was the only inning with no runs scored, the first was relatively quiet as well.

That being said, Shelby County was able to kick start its offense with an opening-inning run in the top half of the first.

It started with a leadoff double from Peri Clark as she drove the first pitch she saw to center field. After a walk put Maggie West on board as well, Briarwood was able to pick up its first out of the inning.

Clark and West, however, were able to advance into scoring position. Katelyn Lucas was able to take advantage as she found her pitch in a 2-2 count and drove a ground ball to shortstop that allowed her to reach safely and brought Clark in for the game’s first of many runs.

That marked the only run of the opening inning as Briarwood failed to put more than one base runner on in the bottom half.

After a scoreless top of the second, Briarwood was able to turn its deficit around with one swing of the bat in the bottom of the second inning when Riley Coyne blasted a leadoff home run over the left field wall to tie things up quickly at 1-1.

Now that each team had scored a run apiece the offenses were warmed up and it showed in the third inning as the two teams put together one of the most productive innings of the game with five combined runs.

Before an out was recorded in the top half of the inning, Clark, West, Lauren Carter and Lucas had all picked up a hit or walk for the Wildcats.

Carter’s hit was a double and drove in both Clark and West to put Shelby County on top 3-1. Jenna Castleberry was the next batter to the plate and although she grounded into a double play, she also drove in Carter for the Wildcats’ third run of the inning.

Ashlyn Blankenship was able to add another double during the next at bat, but she was left on base to end the inning.

Briarwood, now down three runs, came to the plate in the bottom of the third looking for an answer.

Two doubles in the inning as well as a single and a fly out that allowed a run to score gave the Lions two runs and put them down by just one run at the end of the third.

Briarwood’s confidence had grown and it carried over into the top half of the fourth inning as the defense forced a 1-2-3 inning to bring the offense right back to the plate.

In the bottom of the fourth, Briarwood was able to get a double from Anna Donohue as she hit a fly ball deep to center field to bring in a run for the Lions.

While it was their only run of the inning, the Lions’ confidence looked to be growing.

Shelby County answered quickly, however in the top of the fifth with a solo home run from West to start the inning, followed by singles from Nataley Whitner, Jenna Castleberry and Blankenship and a double from Lucas.

All of that action at the plate led to the Wildcats walking out of the top half of the fifth with a 7-4 lead.

Having to play catchup for the first four innings of the game, Briarwood was in familiar territory and didn’t panic. Coyne came to the plate to start the bottom of the fifth and blasted her second home run of the game over the left field wall to immediately get one run back.

The Lions sprinkled in three singles the rest of the inning that allowed one more run to score as Briarwood ended the inning down by just one run at 7-6.

Shelby County added one more insurance run to cushion its lead in the top of the sixth when Carter stole home to give the Wildcats an 8-6 advantage.

Briarwood went scoreless in the final two innings as Haley Horton came in for relief of Castleberry in the bottom of the sixth and threw two scoreless innings to finish off the win.

Lucas was unbelievable at the plate as she went 4-for-4 with one RBI and one run scored to pace the Wildcats. Carter ended the night 1-for-3 with two RBIs and two runs scored, while Clark and Blankenship picked up two hits apiece.

With the win, Shelby County moved to 1-0 in area play, while Briarwood fell to 0-2.