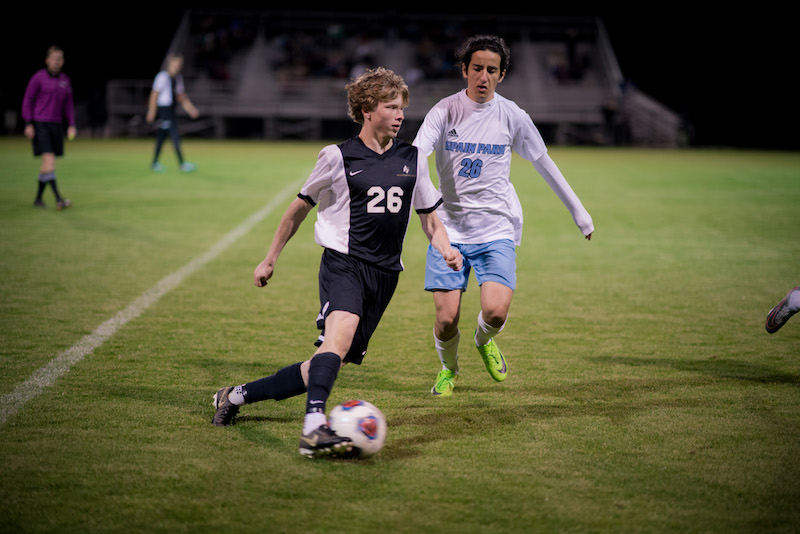 Temperatures in the 40s didn’t scare away several soccer teams as they took to the field on Thursday, March 8, looking to pick up important wins to build confidence or get a foot forward in area play. Below are recaps from all of the games that took place.

After losing 3-1 on the road at Chelsea, Westminster (5-1) has now won two games in a row by a combined 12-3 as the offense seems to be clicking.

Spain Park is on the opposite end of the spectrum. After winning the 2018 Island Cup over several good teams, the Jags have lost three consecutive games.

The positive for Spain Park, all three losses have come by one goal to ranked opponents, which means the Jaguars are on the verge of breaking through. SPHS is now 3-6-1 overall and 0-1 in area play.

Thompson hadn’t lost a game in the regulation since Feb. 15 heading into an area matchup with Vestavia on Thursday, March 8, but the No. 3 Rebels were in good shape as well having won three in a row.

The Warriors had several opportunities and good lucks but were unable to get the ball into the back of the net as Vestavia went on to pick up the area win by a final of 1-0.

Thompson is now 6-3-1 (0-1) on the season with that tie being an penalty-kick loss to Spain Park and their last two losses coming by one goal.

In a weird game where it felt like Chelsea could have won 10-1, the Hornets were able to pick up a 3-1 victory against Taladega.

Goals were scored by Andrew Messier and Tony Nettuno, while Talladega also had an own goal when Messier crossed the ball into the box during the first half.

While those three goals were enough to win, the Hornets hit the cross bar at least that many times in what could have been a more dominant effort.

Nonetheless, Chelsea got back picked up another win on the season to move to 4-2-2 overall. The Hornets are also 1-0 in area play after a win against Helena in overtime earlier in the week.

After a slow 2-2-1 start, Briarwood suddenly looks like the state-championship contending team it was expected coming into the season after winning its sixth consecutive game on March 8 by a final of 10-0 against Woodlawn.

Even more important than their now 8-2-1 overall record is that the win against Woodlawn marked the Lions’ fourth area win of the season as they sit at 4-0 in area play and have seemingly locked up a spot in the playoffs with four area games left.

It marked the third mercy-rule win for Briarwood and the fifth shutout in the team’s six-game winning streak as they have beaten teams 42-2 in that span.

Montevallo played host to Sylacauga on Wednesday, March 7, and picked up its sixth win of the season. The Bulldogs are now 6-1-1 overall and have put together their second three-game winning streak of the season after starting 3-0.

During its most recent three-game streak, the Bulldogs have outscored Sipsey Valley, Autaugaville and Sylacauga by a combined 21-2 as they shutout both Sipsey Valley and Augtaugaville.

After losing three of four games, the Chelsea Hornets have responded with two consecutive shutout wins against Helena and Westminster at Oak Mountain by a combined 12-0.

On Thursday, March 8, the Hornets were able to take down a ranked Westminster team 4-0 as they picked up their third shutout in the last four games.

Chelsea’s girls are now 5-3-1 overall and more importantly 1-0 in an area that features much improved Helena and Pelham teams.

Westminster had a three-game winning streak snapped and is now 3-1-1 this season.

Montevallo’s girls lost for just the third time this season when Sylacauga was able to pick up a 2-0 shutout on March 7.

After starting the season 1-2, the Bulldogs had won two consecutive games against Childersburg and Sipsey Valley by final scores of 2-1 and 5-2, respectively.

All three losses this season have come in shutouts, but Montevallo still sits at 3-3 overall and will be in contention for a playoff spot.