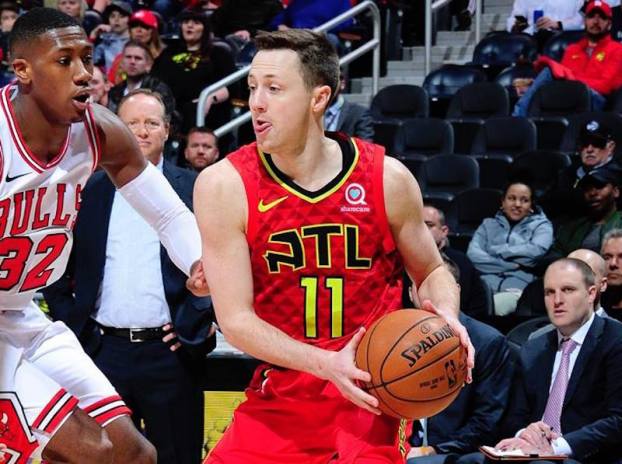 Spain Park's Josh Magette posted several career highs against the Chicago Bulls on Sunday, March 11, as he looks to cement himself in the NBA. Magette is also the current leader in assists in the G-League. (Contributed)

Magette, who is in the midst of a two-way contract that features playing a certain amount of NBA games and G-League games, played in his 13th NBA game when the Hawks hosted the Bulls, and he made the most of his highest minute total of the season.

His previous high coming into the game was 17 minutes back on Saturday, Nov. 25, 2017. That capped off a three-game stretch where Magette played at least 13 minutes.

His best game during the stretch was against the Los Angeles Clippers where he posted five assists, four points and four rebounds. Magette also posted a career-high six assists two games later against the Toronto Raptors.

On March 11, however, Magette topped his career high in assists, minutes and points.

He was able to score seven points and dish out eight assists, while grabbing two rebounds and turning the ball over just once in a 129-122 loss to Chicago.

Magette finished the game 2-6 from the field, 1-3 from beyond the arc and 2-2 from the free throw line.

The performance came on the heels of a 15-minute game just two days earlier where he matched his previous career high of six assists.

It’s unclear if the performance will spark more minutes for the 28-year old NBA rookie, but his G-League stats show that he’s ready to take on a bigger role in the NBA.

Magette, who has now spent just 13 of his maximum number of 45 game in the NBA, is dominating the G-League.

While the NBA is a different animal, Magette showed in just 22 minutes of action that he can come close to giving you that same production at the highest level after almost going off for a double-double against the Bulls.

With 15 games left on the Hawks’ schedule, Magette should have the chance to finish the season out at the NBA level to earn a more permanent role moving forward as Atlanta, who is last in the Easter Conference, won’t be battling for a playoff spot.