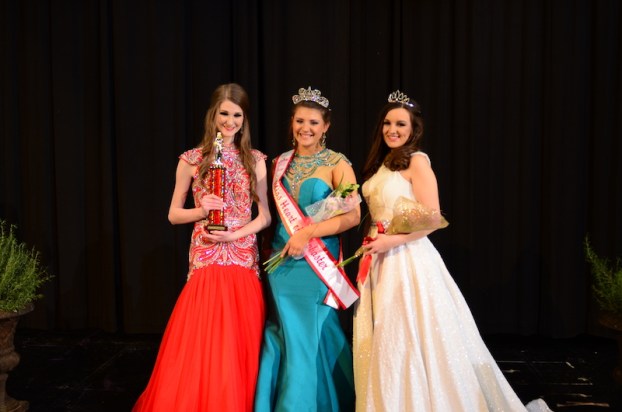 ALABASTER – Girls of all ages were crowned in the sixth annual Miss Alabaster pageant on the evening of Saturday, March 5. Former Miss Heart of Alabaster Judge and Chilton County Peach Queen Julie Bentley served as the emcee.

Letson said 37 girls participated in this year’s pageant, which is almost double the amount of contestants she’s seen in the past.

“It’s grown, and we’re happy about that,” Letson said. “People are starting to hear more about our pageant. I think the girls had a lot of fun.”

In the Tiny Division, which included girls between the ages of 3 and 5, Amira Qaquish received the People’s Choice Award and crowned as first alternate. Gracen McCoy was awarded Miss Photogenic, and Jaidyn McDuffie was crowned as the 2018 Tiny Miss Heart of Alabaster.

Kaitlyn Ensor was awarded People’s Choice in the Princess Division, which included girls between the ages of 6 and 8. The third alternate was Aubrey Bauer, the second alternate was Chloe Bobo and the first alternate was Bella Rumley. In addition to receiving the Miss Photogenic award, Audrey Allen was named as the 2018 Princess Miss Heart of Alabaster.

The People’s Choice Award in the Pre-Teen Division for girls ages 9 to 11 went to A’shya Brown. Kaitlyn Maddox was crowned as Miss Photogenic and as the third alternate. Maggie Pike was the second alternate and Tristan Lee was the first alternate. Katie Grace Carlee was recognized as this year’s Pre-Teen Miss Heart of Alabaster.

In the Jr. Teen Division for girls ages 12 to 14, Gabrielle Hester won the People’s Choice Award. Victoria Leathers was the third alternate, Lorraine Baker was the second alternate and Kelsey Lemons was the first alternate. Angel Maddox’s name was drawn to receive a scholarship to compete in the National American Miss Alabama Pageant, in addition to her being crowned as Miss Photogenic and the 2018 Jr. Teen Miss Heart of Alabaster.

In the Teen Division, which included young women between the ages of 15 and 18, Holly Holcomb received the People’s Choice Award and Miss Photogenic. Caitlyn Smith was the first alternate. Gracelyn Coker was crowned as this year’s Miss Heart of Alabaster.

Coker, a junior at Thompson High School, said this was her first time to participate in the Miss Heart of Alabaster pageant. In the past, she said she has done several Miss THS and Miss Outstanding Teen pageants, and plans to compete in Distinguished Young Women.

“This feels really good. It was my first time doing this pageant, and I was just doing it for fun,” Coker said. “I plan to represent Alabaster in a positive way.”

In its first few years, Letson said the pageant raised funds for the American Heart Association in honor of her mother’s battle with heart disease. After her mother, father and sister all died to cancer within a two-year period, Letson decided that the pageant proceeds would benefit the American Cancer Society from then on.

“It’s nice to honor them while doing this for a good cause,” Letson said.

Letson also thanked the numerous volunteers who made the pageant possible, including visiting queens from other pageant circuits, the Miss Heart of Alabaster Queens from 2017 and close personal friends.