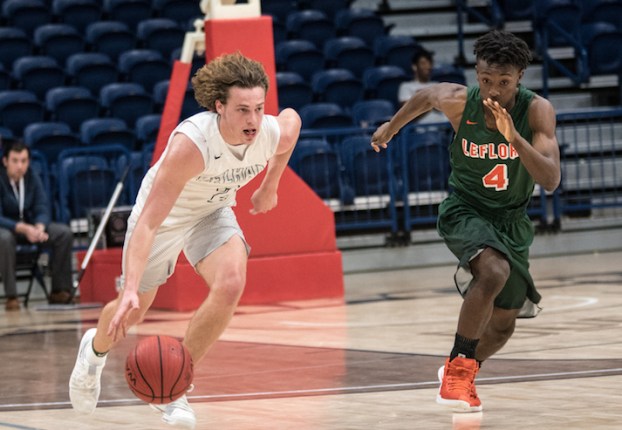 Pelham's Justin Allison has been named the 2017-18 boys' basketball Player of the Year in Shelby County after averaging 25 points per game during his senior season. (File)

PELHAM – After losing 66-63 to Opelika in the sub-regional round of the playoffs, Justin Allison didn’t immediately think about it being his last game in a Pelham Panthers’ uniform, but instead thought about how exhausted he was after dropping 41 points (34 in the second half) in the double-overtime effort.

Then it sunk in.

It was his last game in the uniform he had put on for the last three years, as the senior had walked off the floor after a Pelham basketball game for the final time.

“When I got into the locker room, I realized that was the last time I would ever put on a Pelham jersey,” Allison said. “It hurt for a long time. I’m still getting over it today. We’ve all got to move on eventually, but it hurt for sure.”

While that last game was heartbreaking in many facets, Allison couldn’t have imagined going out with the effort he and his team gave during that game, while Pelham head coach Joel Floyd had even higher praise.

“Our last game was just an epitome of who Justin has been for us,” Floyd said. “We struggled as a team and weren’t playing the way we needed to offensively and pretty much in the second half Justin just said ‘We aren’t going to lose today.’ He did everything you could possibly do to try and make sure we didn’t lose.

“That’s just who Justin was for us. If we needed something, he was going to make sure to go out there and make it happen.”

It was efforts like that 41-point performance, or the two he put together to start the season where he had back-to-back 31-point games to join the 1,000-point club that earned Allison the 2017-18 Shelby County Player of the Year award.

Allison was the only player in the county who averaged at least 20 points per game as he posted 25 points per game, while also averaging 4.8 rebounds, 2.2 assists and 2.3 steals per game during his final season.

“This is stuff I’ve worked for my whole life,” Allison said. “You don’t just come in and win awards like this, you have to earn it. It’s hard to play in this county, but it’s a lot of fun.”

Allison joins his teammate from the two previous years in Alex Reese, who is now at Alabama, as well as older brother Zach Allison as Pelham players who have won the county’s top honor in the last five years.

Reese won at least a share of the award in back-to-back years as Zach Allison won the award two years earlier and Justin Allison wins it one year later to give the Panthers the award in four of the last five years.

That’s a credit to Floyd, who has a special relationship with Allison and is someone the senior guard will miss moving forward.

“I’ll miss coach Floyd and coach (Lucas) McDonald yelling at me all the time,” Allison said with a laugh, before joking that they should retire his number. “But in all seriousness, it’s been a lot of fun being a part of this varsity team. I’ve been a part of two of the best seasons we have ever had. I’m going to miss it like crazy.”

It’s debatable about whether Allison will miss Pelham and Floyd more, or whether Floyd will miss having Allison around more, and it shows in a peculiar way as the two have formed a special relationship.

“He’s like that little gnat that flies around your ear while you’re on the golf course,” Floyd said with a smile. “We’ll miss his every day annoyance. There’s never a moment he sees any of us coaches and he’s not messing with us in some way.

“We’ll also miss his competitiveness and leadership. I’ve coached a lot of really good players, but I’ve never coached a player that competes as hard as him. Without a doubt he’s the hardest competitor.”

Allison said it’s that kind of relationship with his coaches that has helped form him into the player he has become.

“I love coach Floyd and coach McDonald,” Allison said. “Without them I wouldn’t be where I am today.”

Both coaches have helped transform Allison from an undersized player into the second leading scorer in Pelham High School history behind Alex Reese with a total of 1,577 career points.

Despite those numbers and being one of the best players in the state, that size factor is still an issue for the 6-foot guard.

“I just have to keep believing myself,” Allison said. “I’m not going to shoot up 10 inches, but I can get bigger, stronger and faster. I know I have what it takes, but all I can do is put in the work, the rest is in God’s hands.”