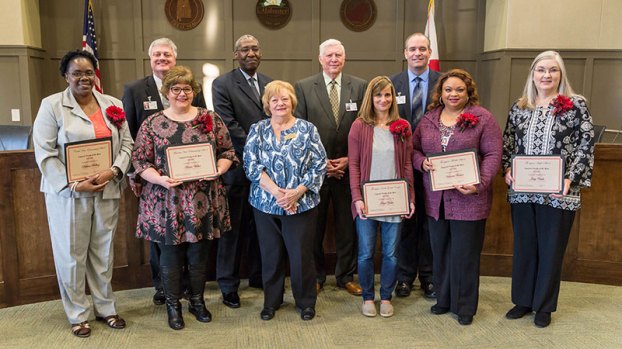 Alabaster Board of Education members honor the district's support personnel of the year during a March 12 meeting. (Reporter Photo/Neal Wagner)

ALABASTER – Alabaster City Schools staff members who work behind the scenes – and sometimes at the forefront – to ensure the system’s success earned the spotlight on March 12 after being honored by their schools.

ACS Board of Education members honored each school’s Support Personnel of the Year during their meeting, and also selected the district’s top school support employee.

“I’d like to thank each of you for your service to Alabaster City Schools, and congratulate you for being recognized by each of your schools,” said ACS Superintendent Dr. Wayne Vickers.

The following employees from each school were honored during the meeting:

Yoder also was named the school system’s Support Person of the Year for going to great lengths to ensure the students at TSGC are taken care of. While reading a letter from school Principal Dr. Daniel Steele, Vickers said Yoder is “dependable, professional, flexible and compassionate.”

A few years ago, Yoder made one student a part of her family.

“A couple years ago, she formed a unique bond with one student in particular. As it turns out, this young boy was actually in need of a family. Then she and her family opened their hearts and their home, and she became a new mom,” Steele wrote. “The adoption was finalized a little over a year ago.”

In addition to the support personnel of the year awards, the School Board also honored the following other district winners:

Who are the candidates for Alabaster’s School Board?

By NEAL WAGNER / Managing Editor ALABASTER – The Alabaster City Council will interview eight candidates for a seat on the city’s... read more